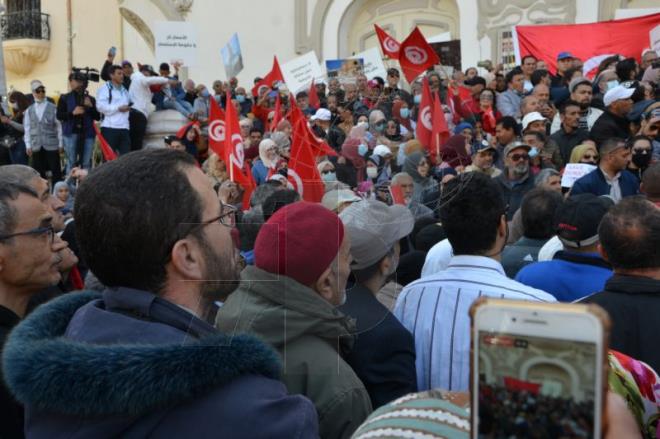 Tunisians take to the streets to protest dissolved parliament, other presidential decrees 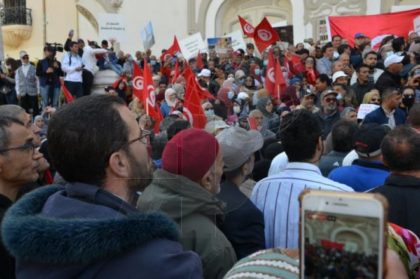 Hundreds of Tunisians took to the streets Sunday, April 10 in Tunis, for the largest protest against President Kais Saied since he took office.

Despite numerous checkpoints and controls, hundreds of people gathered on Bourguiba Avenue, at the call of Islamist Ennahdha party and “Citizens Against the Coup”, a grassroots initiative.

The demonstrators demanded the resumption of the activities of the Parliament, the end of the suspension of the Constitution, the formation of a government of national salvation, and the renunciation of the decisions taken by President Kais Saied, since July 25, 2021, reports the Tunisian news agency TAP.

The protesters, lamenting the political crisis, coming in the midst of a socio-economic and health crisis, chanted slogans such as “Freedoms, freedoms… the police state is over”, “There are no military courts for civil cases”, “The people want national unity”, “Freedoms, freedoms, down with the coup” and “The judiciary is independent…” according to TAP.

Politician and human rights activist Ahmed Nejib Chebbi, who participated in the demo, called for the creation of a national salvation front which brings together all political and civic forces without any exclusion, TAP said, adding he called for devising a clear roadmap to steer the country out of an unprecedented political, economic and social crisis.

He also condemned what he called “a coup” by President Kais Saied against the Tunisian constitution, “one of the best contemporary charters.”

Jawhar ben M’barak, one of the founders of Citizens against Coup, reiterated rejection of Kais Saied’s decisions and called for the protection of state institutions against any autocratic “drift”, describing President Saied’s decision to dissolve parliament and summon deputies who participated in the virtual plenary session by the Anti-Terrorist Brigade as “illegal”.

Ben M’barak called on the elected members of the dissolved parliament to hold more parliamentary sessions, exercise their duties and take decisions to protect the Tunisian people from any “populist” decision taken by President Saied.

“President Kais Saied has plunged the country into chaos,” he accused.

TAP quoted several other participants in the demonstration who denounced the July 25 coup and condemned the “determination of President Saied to legitimize and justify the coup, suspend the constitution, bring civilians before military courts, dissolve the parliament and initiate legal action against MPs for plotting against state security.”

The demonstrations coincide with the commemoration of the Martyrs Day, celebrated every April 9.

Tunisia commemorated Saturday the 84th anniversary of the events of April 9, 1938, when riots took place resulting in the death of 22 Tunisians in a bloody shootout to suppress demonstrations that demanded the institution of a parliament in Tunisia still under French protectorate.

Tunisia has been plunged in a serious political crisis since July 25, when President Kais Saied imposed exceptional measures, including freezing the powers of parliament (before deciding to dissolve it on March 30), enacting laws with presidential decrees and dissolving the Supreme Council of the Judiciary.

The majority of political forces in Tunisia reject Saied’s decisions, calling them a “coup against the constitution,” while other forces support them, seeing them as a “recovery of the 2011 revolution process,” which toppled the regime of former president Zine El Abidine Ben Ali (1987-2011).