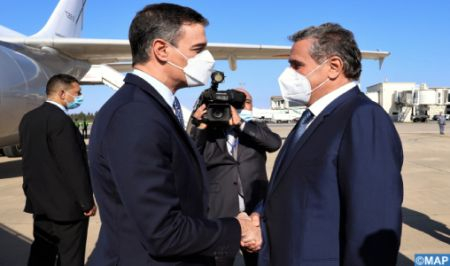 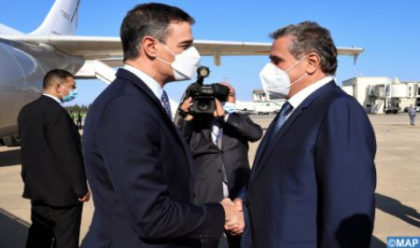 Spain’s Prime Minister Pedro Sanchez started Thursday a landmark visit to Morocco at the invitation of King Mohammed VI as the two countries are opening up a new era in their relations based on transparency, mutual respect and permanent consultation.

Upon his arrival in the North African Kingdom, Mr. Sanchez was greeted by Moroccan peer Aziz Akhannouch ahead of a historical meeting with King Mohammed VI.

His visit marks the end of the diplomatic spat that lasted nearly one year after Madrid’s decision to host secretly Polisario leader, under a false identity, in connivance with Algiers.

The crisis ended with a letter sent lately to King Mohammed VI by Spanish PM who voiced clear support to Morocco’s territorial integrity and autonomy plan for the Sahara.

He also described Morocco’s autonomy initiative as “the most serious, realistic and credible” basis for settling the Sahara issue, dealing a hard blow to the Algeria-backed polisario separatist group still clinging to self-determination referendum option, dropped many years ago by the United Nations.

The Spanish support for the autonomy plan comes after similar positions voiced by the United States, Germany, France, Israel and other countries in Africa and the Arab world.

Several Spanish, American and European influential politicians, MPs, analysts and investors have praised the Spanish supportive stand to Morocco’s territorial integrity, saying it the ONLY feasible solution and the ONLY basis for a just and lasting resolution of the Sahara regional dispute.

North Africa Post's news desk is composed of journalists and editors, who are constantly working to provide new and accurate stories to NAP readers.
NEWER POSTHandling of Disputes: The World Could Learn from the Diplomacy of Morocco (Washington Times)
OLDER POSTItaly turns to Libya to replace Russian energy supply