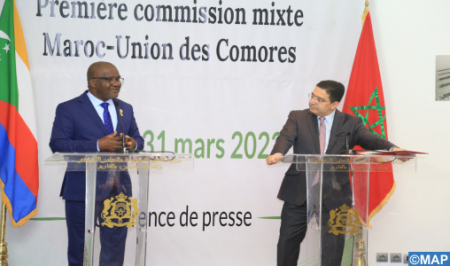 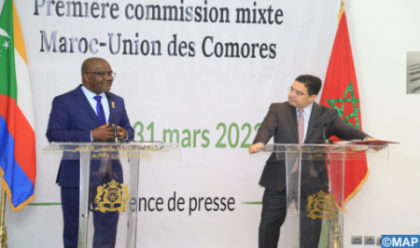 The Union of the Comoros on Thursday reaffirmed its “unwavering and unconditional” support for the Moroccanness of the Sahara and the autonomy plan as the “only solution” to settle the regional dispute over the Sahara, welcoming Spain’s recent “far-sighted” stance on this issue.

The Comorian Foreign Minister Dhoihir Dhoulkamal reaffirmed the unwavering and unconditional” support of his country for the territorial integrity of the Kingdom of Morocco, for the Moroccanness of the Sahara and the autonomy plan for the Moroccan Sahara as the only solution to this regional dispute, while reiterating his country’s full support for the role played by the United Nations as the exclusive and consensual framework for achieving a realistic, pragmatic and sustainable solution, says the joint communiqué issued at the end of the 1st session of the Morocco-Comoros joint commission, held in the Southern city of Dakhla.

The Union of the Comoros, the first country to open a consulate in Laayoune, “welcomed with great satisfaction the just and far-sighted stance adopted by the Kingdom of Spain, recognizing the autonomy plan as the most serious, realistic and credible solution to the regional dispute over the Moroccan Sahara,” the communiqué said, adding that the Comorian government welcomed this “decisive turning point” in the international recognition of the territorial unity and integrity of the Kingdom of Morocco.

The 1st session of the Morocco-Comoros Joint Commission, convened in Dakhla was marked by the signing of eleven cooperation agreements and memorandums of understanding, covering several areas, including protection of investments; prevention of tax evasion and frau; tourism; Islamic affairs; the transfer of technologies; fisheries and aquaculture; employment and labour; energy, mining and geology; and education.

North Africa Post's news desk is composed of journalists and editors, who are constantly working to provide new and accurate stories to NAP readers.
NEWER POSTMorocco-Ukraine: New phone talk between Foreign Ministers
OLDER POSTDoes Algeria have leverage to retaliate from Spain after its Sahara move?