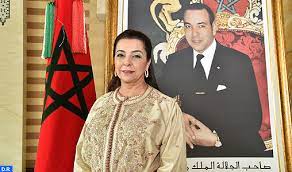 In a statement to Spanish news agency EFE, Mrs. Benyaich said “a new stage, a new page is opening up in the relations between the two neighboring countries”.

The return of the Moroccan ambassador marks the end of the diplomatic spat that lasted nearly one year putting on hold several partnership projects. Rabat had recalled its ambassador to Spain for consultation in May last year in protest against Madrid’s decision to host secretly Polisario leader, under a false identity, in connivance with Algiers.

In his message addressed Friday to King Mohammed VI, Spanish PM said Madrid supports Morocco’s autonomy initiative, describing it as “the most serious, realistic and credible” basis for settling the Sahara issue.

On Friday, the Spanish government presidency issued a statement saying that Spain is committed to respecting Morocco’s “sovereignty and territorial integrity,” as part of a “new era” in bilateral ties.

“We are ushering today a new era in our ties with Morocco, based on mutual respect, the implementation of agreements, refraining from unilateral actions, transparency and permanent communication,” said the statement.

“This new era will be elaborated…in a clear and ambitious roadmap in order to guarantee stability, sovereignty, the territorial integrity and prosperity for our two countries,” underlined the statement.

Washington, Paris, Rome and several other capitals from around the world have also welcomed the Spanish position on the Sahara, stressing that the “serious, credible and realistic” autonomy plan offered by Morocco under its sovereignty is the ONLY feasible solution and the ONLY basis for a just and lasting resolution of the Sahara regional dispute.

North Africa Post's news desk is composed of journalists and editors, who are constantly working to provide new and accurate stories to NAP readers.
NEWER POSTAlgeria once again shows that it is genuine party to Sahara conflict
OLDER POSTUS Farmers & Members of Congress pressing for return of Moroccan fertilizers in America