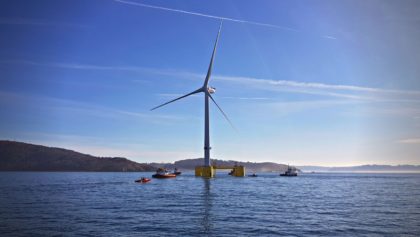 A recently released report by the Global Wind Energy Council (GWEC) ranks Morocco among the top 5 countries likely to emerge as global hubs for floating offshore wind energy, a technology that is set to see unprecedented growth in the coming years.

Morocco’s thriving offshore wind energy market has put the North African kingdom in the first place in Africa and in the MENA region, according to the GWEC, the leading wind energy tracking institution.

Thus, of the 115 countries examined by the GWEC, and after an initial selection of 30 countries considered to have high potential, five of them were highlighted by the authors of the report: Ireland, Italy, the Philippines, the United States (west coast) and Morocco. These five countries are considered to be the most equipped markets, from a technological and political point of view, to rapidly develop projects in the floating offshore wind sector, and become world giants.

Highlighting Morocco’s potential in wind energy, the council states that the country boasts a “significant resource and a government committed to renewable growth,” and meets all the seven criteria established by the GWEC to measure countries’ potential. These criteria include in particular technical capacities, climatic and geographical conditions, and above all strong and ambitious public policies in terms of the development of renewable energies.

“Access to large wind resources, the existence and achievement of green project targets, and increased energy security, are the main drivers for the development of floating offshore wind in Morocco,” explain the authors of the report.

In terms of wind resources, the GWEC reports that wind speeds off the Moroccan coast vary considerably, with winds as low as 5 m/s for the main cities of Casablanca and Rabat, while the strait areas from Gibraltar and along the southern part of the Atlantic coast have average wind speeds above 10 m/s.

“The largest area with access to high wind speeds is off the southern Atlantic coast, where water depths drop sharply near the shore and are generally between 60 and 500 meters,” explains the GWEC.

In addition to the abundance of wind resources, Morocco can rely on a strong political will to achieve the objectives of sustainable development and the use of renewable energies.

While Morocco’s natural resources are a major driver of its positive performance on the energy front, the country’s government has been instrumental with its continued display of significant will to set and reach renewable energy targets, underline the authors of the report, who recall that the Kingdom plans to add a capacity of 4.2 GW for wind energy by 2030.

Another asset of Morocco lies in its logistical capacities: “Morocco has suitable ports near potentially attractive sites, as is the case for Agadir,” specify the authors of the report. The proximity of sites on the Atlantic coast to the port of the capital of Souss, combined with significant wind resources, should drive down production costs, making this energy more competitive.

The only downside to the table: the electricity network in southern Morocco lacks the capacity to manage the large-scale withdrawals from future offshore wind farms, says the GWEC. It noted, however, that the National Office for Electricity and Drinking Water (ONEE) has a network development plan for 2019-2023 which provides for investments to integrate renewable energies.

All these assets are likely to make Morocco a major player in floating offshore wind power, while growth forecasts for this market worldwide are constantly being revised upwards.

The International Energy Agency (IEA) estimates that floating offshore wind projects will have to be multiplied by 13 by 2030 worldwide to reach 80 GW of capacity by 2030. By 2050, this capacity must increase to 2,000 GW, in order to achieve the objective of limiting global warming to 1.5°C.

Morocco launched its first environmental plan in 2009, with the goal of sourcing 42% of the country’s energy needs from renewable sources by 2020. The 2020 target was achieved, and the government has set a new renewable energy target of 52% by 2030.

While Morocco is yet to set up goals for offshore wind farms, the country has an overall wind target set to increase national wind energy input to 1000 megawatt (MW) by 2024, explained the GWEC report.

As of 2022, southern Morocco’s coastal town of Tarfaya is also home to Africa’s biggest wind farm, with a capacity of 301 MW.