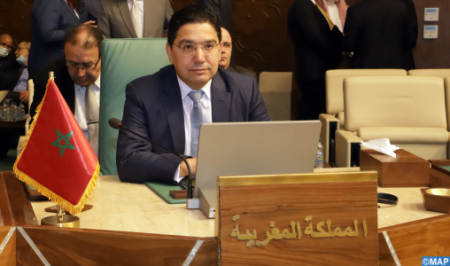 Arab Summit, a Responsibility not a Privilege (FM) 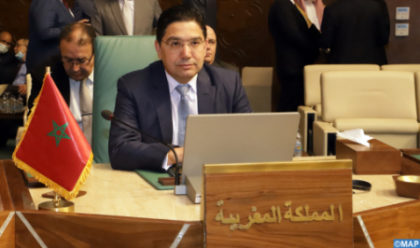 “The Arab summit is a responsibility and not a privilege and must, therefore, bring added value and not be at the service of any agenda”.

The remarks were made by Moroccan Foreign Minister, Nasser Bourita, at the 157th session of the Council of the Arab League Wednesday in Cairo.

Bourita called for good preparation of the Arab Summit not only in terms of subjects, but also and above all according to well-defined specifications.

Through their adoption in the year 2000 of the appendix on the date, periodicity and regularity of the Arab Summits in the month of March each year, the Arab leaders have shown determination and firmness in the organization of their agendas, as well as an unfailing willingness to give substance to their meetings and to discuss pressing issues for their countries in accordance with the aspirations of the Arab peoples, he said.

The minister added, in this regard, that this spirit has been respected since that date, far from any adaptation to any particular consideration, noting that “our attachment to this achievement, which has reinforced the Charter of the League of Arab States and has become one of the prime foundations of our joint action, is matched only by our attachment to the collective will and the consensus that characterize the decisions of the Arab League”.

Bourita, on the other hand, said that this meeting is being held in the light of very delicate and sensitive developments, which have occurred at the regional and international levels, and the real challenges they pose to our health, food and energy security.

“The Arab region must, more than ever, keep pace with the renewed demands of Arab societies and the increasingly accelerated challenges facing our central Arab issues, on top of which the Palestinian issue which is at the core of our concerns and our priorities, far from any political escalation”, he pointed out.

The minister who renewed the attachment of King Mohammed VI to the Palestinian cause and to its defense affirmed that this cause “represents, since independence, one of the constants of the foreign policy of the Kingdom of Morocco.”

Supporting this cause requires advocating different methods and approaches to make it more effective and compatible with the current developments, he said, assuring that Morocco will spare no effort to support this just cause, until the Palestinian people realize their aspirations to establish their independent State on the borders of June 4, 1967, with Eastern Al-Quds as its capital, in accordance with the two-State solution and the international references in force.

Bourita who recalled that King Mohammed VI is the chairman of the Al-Quds Committee said that everyone knows the importance and the symbolism of the Holy City of Al Quds and the urgency of preserving its legal and historical status and its religious, cultural and civilizational character as a space for the coexistence of the three monotheistic religions and a symbol of peace.

The Moroccan official on the other hand regretted that Arab contribution to the settlement of conflicts in the Arab region has remained limited and, in some cases, dispersed. This situation “is not an inevitable destiny that forces us to give up, but rather a factor that should motivate us for more coordination and more efforts in order to be able to control our destiny”.

Mr. Bourita noted that several initiatives undertaken by Arab countries in this direction were very useful, recalling in this regard the role played by Morocco, under the leadership of the King, in the Libyan crisis and the efforts to provide the Libyan brothers with the best conditions to motivate them to find appropriate solutions to build and develop their modern State.

He also recalled the effects of the coronavirus pandemic, which he said “has forced us to completely review the models of our political, economic and social organization”, adding that this situation has become more complicated in the light of the deterioration of the situation at the international level, with growing political, economic, social, security and environmental challenges.

Food and energy security, being at the heart of Arab national security, requires a collective reflection that takes into account all these factors that threaten the future and stability of the region, he said.