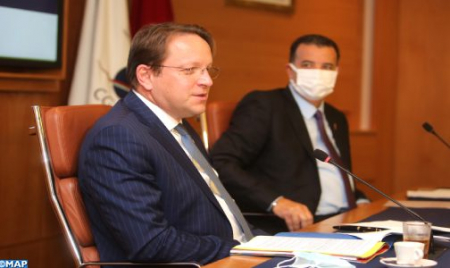 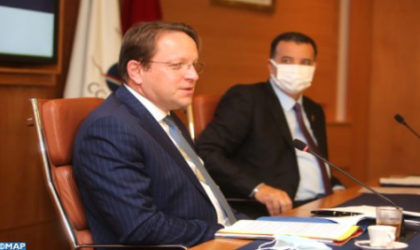 “We are ready to cooperate with you, especially in green energy transition, trade facilitation, digitalization and support for SMEs,” said Mr. Várhelyi during a meeting held Wednesday in Rabat with Head of Moroccan employers’ Union Chakib Alj.

The Commissioner, who is visiting Morocco this March 9-10, recalled in this regard the €1.6 billion funding earmarked by the EU for the promotion of Morocco’s green and digital transformation.

“It is in this framework that the CGEM is working hand in hand with the European peer (Business Europe) in pushing for the modernization of trade and investment relations between EU and Morocco”, said Chakib Alj, hailing cooperation between CGEM and the European Commission in the promotion of entrepreneurship.

“Our country is now following a liberal, pro-business and pro-EU path,” affirmed the CGEM Chief, stressing the importance of the €1.6 billion investment announced by president of the European Commission Ursula von der Leyen during her visit to Morocco for the development of a green partnership, focused on energy and digital technologies to increase connectivity between Moroccan and European companies and markets.

Means to strengthen economic and financial cooperation between Morocco and the EU were also discussed at a meeting in Rabat, Wednesday between the EU commissioner and Minister of Economy and Finance, Nadia Fettah Alaoui.

During the meeting, the Moroccan official welcomed the effort made by the EU within the framework of its “Economic Investment Plan”, while stressing that the areas of cooperation selected for Morocco, fall in line with the government’s priorities and programs.

She also recalled the importance of the financial support granted by the European Union to Morocco and invited the European Commission to further strengthen its commitments under the 2021-2027 programming.

Mrs Fettah Alaoui surveyed some of the priority projects undertaken by the government in the social fields, including, in particular, social protection, education and health.

The discussions also focused on the strategies pursued by Morocco in terms of boosting domestic and foreign private investment, public sector reform, as well as in the areas of energy transition and water.

The two interlocutors reaffirmed their shared desire to strengthen further cooperation between Morocco and the European Commission and to accelerate the implementation of the programs selected within this framework.