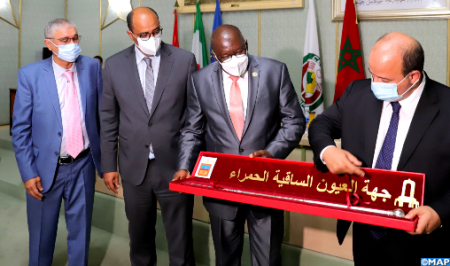 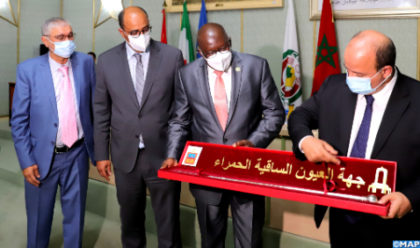 The Parliament of the Economic Community of West African States (ECOWAS) and the Moroccan House of Advisors (Parliament upper house) signed, on Wednesday, the “Laayoune Declaration”, praising the leadership shown by King Mohammed VI in tackling regional challenges.

The document was inked by Speaker of the Upper House, Naama Mayara, and Speaker of ECOWAS Parliament, Sidie Mohamed Tunis following a visit paid by ECOWAS MPs to the capital of the Moroccan Sahara.

The signatories pledge to consolidate cooperation between the Moroccan House of Advisors and the ECOWAS Parliament and promote trade exchanges & investments between Morocco and West African countries to speed up regional integration for shared prosperity and development of the peoples of the region.

They also vow to exchange experience & expertise, hold joint events, and coordinate actions and stands on regional and international issues of common concern.

The “Laayoune Declaration” praises the important role played by ECOWAS in fostering regional integration and calls for strengthening south-south cooperation to counter international & regional challenges and reinforce the economies of the region.
During their stay in Laayoune, members of the ECOWAS delegation visited several projects including the local sports city and the Olympic hall sites, the School of Medicine, the vocational training centre, the University Hospital and other infrastructures.

During an earlier meeting in Rabat with Foreign Minister Nasser Bourita, the ECOWAS Parliament speaker brought up Morocco’s bid to join the West African Economic community, in the wake of its readmission to the African Union in January 2017, saying that Morocco’s membership in this regional grouping is the “best thing for all of us.”

“We will see in general how to work towards Morocco’s full membership in ECOWAS, because we firmly believe that it is the best thing for all of us,” he said.

Sidie Mohamed Tunis also hailed at talks with other Moroccan officials the leadership of King Mohammed VI at the level of the African continent, as well as the quality of the strong and multidimensional relations linking the Kingdom of Morocco and the various West African States.

He likewise commended Morocco’s initiatives in the field of investment in Africa, calling to seize all the economic opportunities available in various promising sectors, to serve the interests of the peoples of the continent and urging for the strengthening of joint African parliamentary action to consolidate the principles of democracy in Africa, the continent of future.