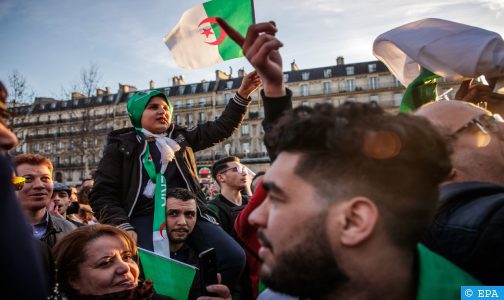 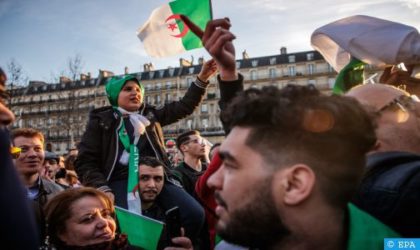 Thousands of Algerian nationals settled in France and across Europe gathered on Sunday in Paris to protest against the continuing repression, human rights violations and deteriorating socioeconomic situation in Algeria.

The huge demonstration was held ahead of the 3rd anniversary of the “Hirak” popular protest movement to be commemorated on Feb.22 by the Algerians and pro-democracy militants worldwide.

The protesters chanted slogans for freedom, justice and democracy in Algeria. They called for the continuation of the battle engaged for “a democratic Algeria” and for “a radical change” of the current opaque ruling system.

They also called for the release of all prisoners of conscience, waving Algerian flags and large banners reading: “Long live Algeria”; “The revolution is still on”; “Stop the repression”; “Rulers Get out”; and “Yes to civilian & democratic state” & “No to a military state”.

Three years ago, on 22 February 2019, Algerians thronged the streets to protest against then-President Abdelaziz Bouteflika’s bid for a fifth term after nearly 20 years in power.

Bouteflika stepped down in April. But Algerians kept on protesting. After ten months into the protests, an election with a record low turnout ushered in Abdelmadjid Tebboune as president. But the demonstrations continued, if not always in the street because of the COVID-19 pandemic, they thrived on social networks.

The nonpartisan protest movement, which ousted President Bouteflika and rebuffed his unpopular successor, demands the departure of the ruling elite and a transition toward more democratic governance.

In another development, the Socialist Workers’ Party (PST), one of the most influential opposition political formations in Algeria, has denounced the “impasse of repression” into which the de facto power in this Maghreb country is sinking.

“The de facto power, far from taking the famous measures of appeasement, promised by some of its relays, is sinking into the dead end of all repression”, noted, in a statement, the PST, temporarily suspended by decision of the Council of State last January 20.

According to the statement, published on the eve of the 3rd anniversary of the “Hirak”, the power has tightened repression and almost totally muzzled democratic freedoms in Algeria, throwing in jail more than 300 people for their opinion. However, the party says, “there can be no police solution to a political problem.”

The party also denounced the cosmetic measures decreed by the regime such as the freezing of taxes, or the unemployment allowances saying these measures “can neither hide the social disaster, nor mitigate the economic collapse of our country.” For the PST, Algeria “needs a real economic and social project and a genuine development strategy that correspond to the legitimate aspirations of the majority of Algerians.”