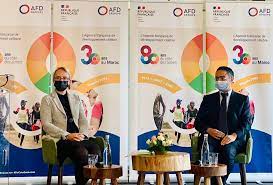 The French Development Agency (AFD) celebrated on Monday, January 31, 2022, in Rabat, 30 years of cooperation with Morocco, a period during which it mobilized €7.6 billion for development projects.

During a ceremony, co-chaired by the French ambassador to Morocco, Hélène le Gal, and the director of AFD in the Kingdom, Mihoub Mezouaghi, the French institution welcomed its “dense and diversified partnership », with Morocco since 1992.

The agency recalled having supported many Moroccan projects relating in particular to the sectors of water, energy, transport, and agriculture. This cooperation has expanded to support “public policies in the areas of education, employment, governance and cultural industries.”

According to the AFD group, Morocco was, during this period, “the first partner of its financial commitments, among its 120 partners, in the world”. Today, the French development agency is delighted to continue supporting Morocco in “its transition towards a more inclusive development model”.

The AFD director in Mihoub Mezouaghi told the media on the sidelines of the ceremony that the agency’s activity in Morocco has reached “a record level” of €610 million commitment in 2021, confirming the group’s positioning in support of the Kingdom’s key reforms.

The year 2021 has seen the implementation of major structuring projects, Mezouaghi said, noting that the Agency supports in particular the reform of the Kingdom’s social protection which will reduce inequalities in access to health care by accompanying the integration of 22 million additional people in the Compulsory Health Insurance (AMO) scheme.

“It also backs the national strategy +Forests of Morocco 2020-2030+ whose objective is to preserve and strengthen the ecosystem services of the forest and national parks while developing local employment (ecotourism, agroforestry),” he added, stressing that the Agency has also strengthened its support for the implementation of gender budgeting, a structuring policy in favor of equality.

After recalling that one third of the Agency’s 2021 commitments support social sectors and the fight against social inequalities, Mihoub Mezouaghi said that AFD has diversified its offer by backing the Kingdom on innovative projects, including the implementation of a State Startups device within the Moroccan administration.

Referring to the various projects with impacts for Moroccans, the official highlighted the more than 150 projects financed by the AFD Group, since 2010, for access to water, sanitation and energy, in the social sectors, agriculture and biodiversity, transport, social and solidarity economy, or in favor of gender equality.

He pointed out that by the end of 2021, the projects supported by the agency have enabled the enrolment of 31,000 students, including 14,000 girls, the professional integration of 95% of the young people trained in the Institutes under Delegated Management, the saving of 1 million tons of carbon emissions, access to a sustainable sanitation service for 240,000 people as well as the commissioning of a tramway in Rabat and Casablanca for 1 million users (44% of whom are women).

North Africa Post's news desk is composed of journalists and editors, who are constantly working to provide new and accurate stories to NAP readers.
NEWER POSTMali: French ambassador ordered by authorities to leave the country within 72 hours
OLDER POSTMorocco to reopen its consulate in Libya closed eight years ago