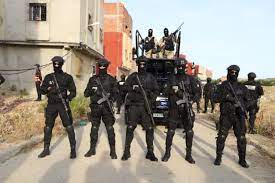 Morocco’s Central Bureau of Judicial Investigation (BCIJ) arrested this Wednesday two suspects for their alleged links to a terror cell affiliated to the ISIS terrorist group.

The two suspects, both aged 23, were arrested in two separate operations in Benguerir and Douar Sidi Kroum, two towns in the Marrakech-Safi region, said the BCIJ in a statement.

Preliminary investigations revealed that the two suspects had pledged loyalty to the alleged emir of ISIS and started sharing extremist content, either directly or through the web, to recruit more people for terror related activities, said the BCIJ statement.

The searches carried out at the homes of the two respondents led to the seizure of mobile phones and documents with extremist content from the so-called “Islamic State”, in addition to masks the suspects were planning to use to conceal their identities when attacking their targets.

Investigations also showed that one of the arrested suspects was praising criminal operations targeting financial and banking institutions and had trained himself to the manufacture of explosive devices to commit terrorist acts.

He also praised the homicide and the attempted homicide committed on January 15 in the cities of Tiznit and Agadir by a man who was confirmed suffering from mental disorders, noted BCIJ’s statement.

The suspects were taken into custody pending the judicial investigation conducted by the BCIJ under the supervision of the prosecutor’s office in charge of terrorism and extremism cases to determine their links with regional and international terrorist organizations and to identify their destructive plans targeting the security of the Kingdom and the safety of the citizens, the statement added.

The arrest of the two suspects comes as part of Morocco’s proactive approach against terrorism.