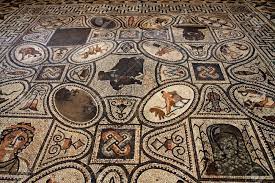 The restoration project of historic mosaics of the archeological site of Volubilis, an ancient Roman city near Meknes, a UNESCO World Heritage Site, was launched Wednesday in presence of minister of culture Mohamed Mehdi Bensaid and U.S. Chargé d’Affaires, David Greene.

Supported by the U.S., the $189,000 project will be carried out by Ifker Association of Education on the Environment and Sustainable Development to restore and preserve historic 2nd and 3rd century mosaics, inspired by Greco-Roman mythology.

“This project is an example of the U.S. Government’s continued partnership with the Moroccan government and with local organizations to preserve and share the Kingdom’s invaluable cultural heritage,” Charge d’Affaires Greene said during the launch ceremony held at the Volubilis site.

The project will build upon Ifker’s partnership with the California-based Getty Conservation Institute Mosaikon, an initiative dedicated to improving the conservation, presentation and management of mosaics in the Mediterranean region.

North Africa Post's news desk is composed of journalists and editors, who are constantly working to provide new and accurate stories to NAP readers.
NEWER POSTMoroccan PM defends performance of his cabinet in first media appearance
OLDER POSTAfter France, Reporters Without Borders voices concerns about future of journalism in Tunisia