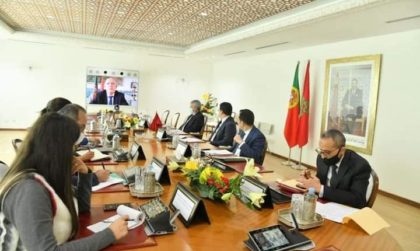 Morocco and Portugal on Wednesday signed an agreement on the stay and employment of Moroccan workers in Portugal, as part of the process of modernizing partnership instruments between the two countries.

The agreement was initialed at the end of a video-meeting between the Moroccan and Portuguese Foreign Ministers, Nasser Bourita, and Augusto Santos Silva.

During the meeting, the Portuguese official commended as “decisive” the role played by Morocco in promoting stability in the region as well as the Kingdom’s role as a growth driver for development in Africa.

The Portuguese top diplomat also welcomed the large-scale reforms undertaken in Morocco over the past two decades and commended the New Development Model as well as the promotion of advanced regionalization in the Kingdom.

He likewise reiterated his country’s attachment to the strategic partnership between Morocco and the European Union and affirmed Portugal’s direct support through direct referral to the Court of Justice of the European Union in support of the appeal made by the Council regarding the judgments of the EU Court on the Morocco-EU farm and fisheries agreements.

The Talks that focused on regional and international issues confirmed the convergence of the two countries’ views on the serious and credible efforts carried out in this framework for the peaceful settlement of conflicts.

The agreement on the stay and employment of Moroccan workers in Portugal aims to respond efficiently to the growing demand of Moroccan labor to benefit from work opportunities offered by the Portuguese economic fabric, through defining the procedures for admission and residence for the exercise of a professional activity in Portugal. The agreement also seeks to strengthen cooperation between the two sides in the field of management of regular migration flows.

Several provisions are stipulated by this agreement, including the process of selection and recruitment of workers, general conditions of work and training, family reunification and social security and taxation.

Under the agreement, Moroccan workers will enjoy the same working, social and professional conditions as Portuguese workers.