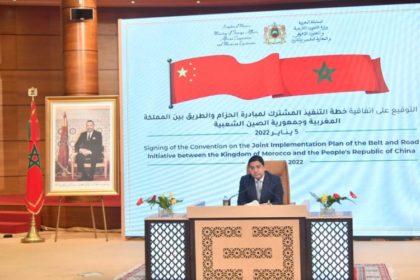 Morocco and China signed the implementation agreement of the Belt and Road Initiative providing for further Chinese investments in the Kingdom.

In a ceremony chaired by foreign minister Nasser Bourita and Vice President of China’s committee for reform and development (NDRC) Ning Jizhe, the two countries vowed to add momentum to bilateral cooperation.

The new deal provides for increased Chinese investments in Morocco and a facilitated access to Chinese funding within the framework of the Belt and Road Initiative or BRI.

It also paves the way for the setting up of joint ventures in the fields of industry and renewable energy and aims to encourage Chinese investments in infrastructure and well as technology transfer and research and development in high-tech areas.

Morocco and China gave their bilateral ties a strategic dimension following a visit by King Mohammed VI to China in 2016.

Bourita said trade between the two countries grew 50% from 4 billion dollars in 2016 to 6 billion in 2021, adding that Chinese companies have implemented 80 projects in the country.

The number of Chinese tourists also grew from 10,000 in 2015 to 200,000 in 2018, said Bourita who highlighted the close cooperation between Morocco and China in terms of vaccine procurement and manufacturing.