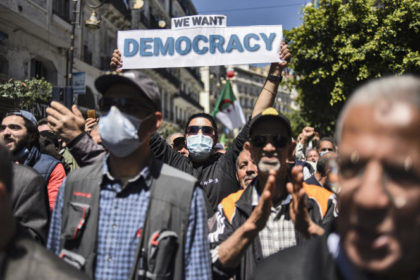 People chant slogans as they march during a student-led anti-government demonstration in Algeria’s capital Algiers on April 20, 2021. (Photo by RYAD KRAMDI / AFP)

Algeria has reported a surplus of $1 billion by November and sees the figure increasing to $2.3 billion by year’s end in what could be commended in a normally functioning economy. But in Algeria’s case, this surplus was achieved after depriving citizens of key goods, leading to high inflation and shortages.

The figure is also partly ascribed to the rise in oil and gas prices which rose from $20.2 billion to $34.4 billion. However, Algeria needs a barrel price of $100 to balance its budget which is unlikely amid forecasts for oil prices to drop once the transition to post-pandemic recovery stabilizes.

So, why the trade surplus posted by Algiers is not an event to celebrate and why is it unsustainable? First, because the structural factors of Algerian exports haven’t changed. The country relies for more of its 98% exports on oil and gas subject to price volatility and doomed to fall due to the global transition towards clean energy.

The surplus is rather a result of depriving the Algerian domestic market of vital goods such as new cars, car components, medicine and foodstuff.

For two years, Algeria banned the import of new cars leading to price hikes of used cars which are now sold for the price of brand-new cars in the country.

Algeria has also led a drastic import cut policy causing severe shortages of medicine that are needed for treatment of dangerous conditions including cancer.

Images of queues for imported products like milk abounded in Algerian social media adding to long queues for bank liquidity, cooking oil and other foodstuff.

Even the products Algeria claims to be self-sufficient are lacking in the domestic market such as potato whose prices more than doubled in the last few months.

Algeria has achieved a trade surplus but it is an unsustainable surplus that came at the price of depriving the Algerian market of key goods and came at the expense of the health and comfort of Algerians.

As a closed off country that has yet to join the World Trade Organization, Algeria adopts a protectionist trade policy that is detrimental to the competitiveness of its own frail industrial and services fabric.

Without opening up its economy and diversifying its exports away from oil and gas, the military regime in Algeria is rather seeking cosmetic solutions to buy time and prevent a fast depletion of its foreign exchange reserves which dropped from some 200 billion dollars in 2014 to some 30 billion dollars currently, not enough to sustain its expansive subsidies policy.