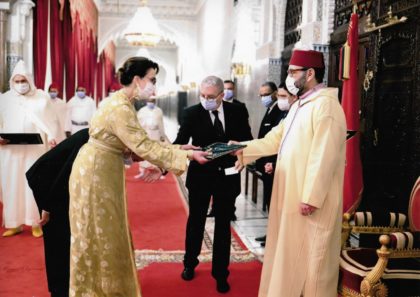 King Mohammed VI, of Morocco, received on Tuesday at the Rabat Royal Palace,  nineteen new ambassadors to be positioned in several capitals in Europe, Africa, Oceania,  Asia, and Latin America.

The Sovereign handed the new ambassadors, among whom three women, their appointment dahirs, before they were sworn in before him.

Former finance and economy minister Mohamed Benchaaboun was thus appointed ambassador to France, in replacement of Chakib Benmoussa who is now Minister of Education.

The audience took place in the presence of Minister of Foreign Affairs, African Cooperation and Moroccans Abroad, Nasser Bourita, and the Chamberlain of His Majesty the King, Sidi Mohamed El Alaoui.