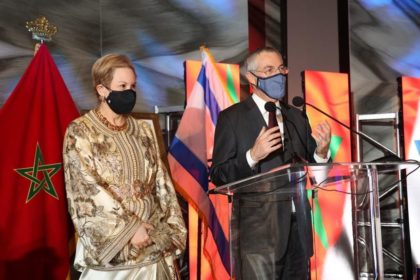 The ambassadors of Morocco and Israel to the United States, Lalla Joumala and Michael Herzog hosted a joint event in Washington to celebrate the first anniversary of the Morocco-Israel-USA tripartite agreement which triggered a dynamic of cooperation in the service of development and peace, with, in particular, the resumption of Moroccan-Israeli diplomatic relations.

Actually, Morocco and Israel established diplomatic ties under the trilateral agreement in December 2020.

Ambassador of Morocco to the United States Lalla Joumala Alaoui and Israeli ambassador Michael Herzog celebrated this milestone together along with the State Department’s Acting Assistant Secretary for the Bureau of Near Eastern Affairs Yael Lempert, several members of the US Congress including Representatives Ted Deutch and Steve Cohen, as well as diplomats and representatives of the political, economic and cultural circles of the American capital.

In an address on this occasion, the Moroccan diplomat described the tripartite agreement as “a historic milestone which paved the way, with the Abrahamic Accords, to an unprecedented momentum in favor of peace, prosperity and partnership, and mutual respect in the region.”

“Under the stewardship of H.M. King Mohammed VI, a bold step was taken a year ago, to re-establish diplomatic ties with Israel and open a new chapter in our bilateral relations,” the Moroccan diplomat said, noting that “this initiative represents the natural evolution of an already rich, multifaceted and long-standing relationship, marked by the Kingdom’s deep attachment to its Moroccan Jewish community and the firm commitment of the sovereign and his ancestors, in favor of the preservation of the Hebrew culture and heritage of our country.”

“The seeds of peace planted over the past year are already starting to bear fruit by positively impacting the life of the peoples of the region”, argued Lalla Joumala Alaoui, deeming that it is “difficult not to be filled with optimism for the future when one observes the enthusiasm and significant momentum that the trilateral agreement and the Abrahamic Accords have generated since 2020.”

“Collectively, we must work tirelessly to ensure that the achievements of the past year are broadened and deeply rooted at the human level. This will be the engine of a dynamic of lasting peace in the region,” underlined the Moroccan diplomat.

“This new chapter in our special relationship goes much deeper than aligned geopolitical interests,” the Israeli ambassador on his part said.

“The relations between the Jewish people and Morocco are ancient, unique and noteworthy. Generations of Jews have found refuge all over Morocco at various points over the last few thousand years,” the diplomat said.

He recalled, in this regard, that the late Mohammed V “courageously resisted the Nazis, preventing them from eradicating the Moroccan Jewish community during the Holocaust”.

“Today, this legacy of generosity and protection from the royal family is all the more significant,” he said, noting that King Mohammed VI took a “historic step” by ordering the integration of the study of Jewish history into the Moroccan education system.

Equally historic, was the King’s initiative to rehabilitate Moroccan Jewish schools, synagogues and cemeteries, he added.

For Israel, said Mr. Herzog, “Morocco is a very important player in the Middle East and Africa”, as it is “a voice of reason, moderation and conciliation”.

“Together, we can advance our shared vision for a peaceful, thriving and stable region. I strongly believe that the relations between us, as well as the relations between Jews and Muslims at large, could make a significant contribution in this respect. They could become a game-changer in many critical areas such as healthcare, climate change, food security, high tech and so much more,” the Israeli diplomat stated further.

The renewal of diplomatic relations between Morocco and Israel is a “turning point” that has deepened existing historical ties, which is likely to favor “a broader peace in the Middle East”, said US Acting Assistant Secretary of state for Near Eastern Affairs, Yael Lempert.

“We see the Moroccan-Israeli normalization agreement not only as a positive element for Israel and Morocco individually, but also as an agreement that will contribute to the stability of the region and a really important element in achieving our strategic objectives,” Lempert pointed out during the event.

“A strong relationship between Israel and Morocco has the potential to contribute to a broader peace in the Middle East, including between the Israelis and the Palestinians,” she said.

Commenting the centuries-old ties between the Kingdom and the Jewish community, the US official noted that they “are among the oldest in the world.”
“Just around the corner from the American Legation in Tangier is one of the city’s oldest Jewish cemeteries, now protected by Muslim guards, a testament to Morocco’s incredible tradition of religious tolerance,” she stressed, adding that the process of re-establishing diplomatic relations has “revived and deepened the historic ties between Morocco and Israel”.

Israelis and Moroccans are already benefiting as “trade and tourism are developing, creating new opportunities for all, including young people and marginalized communities, cultural programs and academic exchanges bridge the gaps and strengthen a culture of tolerance,” the US official said, recalling that very recently, Israel and Morocco signed a memorandum of understanding on defense cooperation.