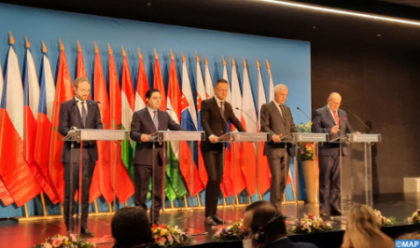 The first “V4 + Morocco” ministerial meeting of the Visegrád Group was held Tuesday in Budapest to discuss ways of fostering cooperation ties between Morocco and this intergovernmental organization gathering Hungary, Poland, Czechia and Slovakia.

Foreign Minister Nasser Bourita is leading a Moroccan delegation to this meeting which aims to develop further relations between participating countries in various fields and building multifaceted partnership.

The Hungarian presidency of the Visegrád Group for the 2021-2022 period has stressed the need to strengthen cooperation with Morocco through the implementation of joint projects in various sectors.

The two sides expressed their strong determination to give new impetus to their cooperation to face common challenges.

“Morocco and its partners within the Visegrád Group have a strong determination to strengthen their cooperation to face common challenges, particularly in the fight against terrorism, illegal immigration and cross-border organized crime”, said Nasser Bourita, during a press conference following this meeting.

Bourita highlighted the promising prospects for cooperation between the two sides and the possibilities of expanding it to new areas by enhancing Morocco’s potential as a gateway to the African continent and those of the Visegrád Group as a platform to Central and Eastern Europe.

He also underlined Morocco’s assets as a pole of stability in the region as well as its strong commitment to the growth and development of the African continent so as to become a “credible and responsible” partner for the V4.

“We will work tirelessly to develop triangular cooperation initiatives between the Visegrád Group and Morocco in favor of Africa,” said Bourita, noting that the Kingdom and the V4 countries share the same conviction regarding the need to diversify partnerships to meet the various current challenges.

For their part, the Foreign Ministers of the member countries of the Visegrád Group welcomed the holding of the first “V4 + Morocco” ministerial meeting, stressing the need to continue this strong, important and enriching dialogue and to strengthen it through operational mechanisms.

They were also unanimous in reiterating their appreciation of Morocco’s role as a provider of peace and stability in the region and its considerable efforts in the area of security and the fight against terrorism.

The V4 ministers also underlined the key role of Morocco in the fight against illegal immigration.

In this regard, they insisted on the imperative for the European Union to provide more support to the Kingdom with regard to border management as well as the strengthening of its capacities in the fight against irregular immigration.

The foreign ministers of the V4 countries also praised the leadership of King Mohammed VI and his commitment to the promotion of the values of peace, stability and coexistence.

Expressing their attachment to Morocco’s position as a strategic partner of the European Union, they reaffirmed the commitment of the Visegrád Group to continue defending Morocco’s interests within the EU.

The V4 Ministers also noted that the European Union must provide direct and substantial support to accompany Morocco in its development efforts, reiterating the position of support for the appeal of the EU Council to the CJEU to cancel the rulings of the European court on the farm and fisheries agreements with Morocco.

The Visegrád Group (V4), which has succeeded in establishing itself as a major alliance within the EU, occasionally widens its work to other partners within the framework of what they call “V4 +” formats, depending on the European and international priorities of the Group’s presidency.

Morocco’s participation in Budapest meeting is part of its strategy of diversifying its international partnerships in line with the Royal Vision.

In addition to its traditional partners within the EU, Morocco seeks to open up to new EU Member States, including member countries of the “V4”, a grouping whose influence continues to increase since its creation on February 15, 1991 in the Hungarian city of Visegrád to speed up the process of integration into the EU and NATO.

Political dialogue between Morocco and the member countries of the Visegrád Group has gained momentum over the past few years, leading to regular political consultations with common desire to boost trade and investments.