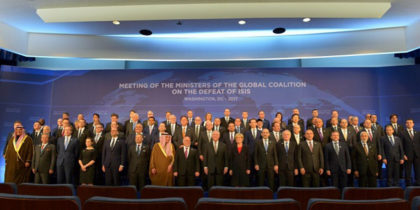 Morocco has been chosen to co-chair Africa Focus Group, set up by the Global Coalition to defeat ISIS, in recognition for the key role played by the Kingdom in the fight against terrorism.

Morocco will chair the Group along with the United States, Italy and Niger. The newly set up group is tasked with enhancing cooperation among member countries to counter ISIS threats in Africa, with the strong involvement of the African partners in the Global Coalition.

Morocco has been chosen to co-chair this new regional group for the leading role it plays at the regional and international level in the fight against terrorism and for its valuable contributions for peace, security and stability in Africa, said a press release issued by the Moroccan foreign ministry.

The selection of Morocco is also an international recognition of the counter-terrorism policy spearheaded by King Mohammed VI, added the statement, noting that Morocco has co-chaired the Global Counter-Terrorism Forum three times, hosts the UN Office for Counter-Terrorism & Training in Africa and organized in 2018 the meeting of Political Directors of the Global Coalition against Daesh

Addressing on Thursday the inaugural meeting of Africa Focus Group held in Brussels, Moroccan foreign minister Nasser Bourita has warned the international community against the growing threat posed by terrorist groups in Africa and the Sahel.

The defeat of ISIS in Syria and Iraq has pushed foreign jihadist fighters to flee to other regions including Africa wherein 27 terrorist groups have been added to the UN Security Council Sanction’s list for their involvement in the death of 12,500 people last year, said the minister.

West Africa and the Sahel are the most impacted regions in the continent, with 7,108 terrorist attacks carried out in 2020, added the minister, noting that more than 1.4 million people have been displaced due to terrorist attacks and violent clashes between security forces and jihadists.

Terrorist groups are also threatening peace and stability in Central Africa and East Africa, he said, stressing that terrorism has cost the African economy $171 billion during the last decade, a major loss which had direct impact on political and social stability of African countries.

In order to counter terrorist threats in Africa, Morocco has engaged bilaterally with several countries and fostered cooperation ties with the United Nations in the Global Counter Terrorism Forum and the Global Coalition Against Daesh, underlined Mr. Bourita.

In its twitter account, the U.S. embassy in Rabat has congratulated Morocco for joining the U.S., Italy and Niger as co-chairs of the Africa Focus Group for the Global Coalition to Defeat ISIS.

“The Kingdom continues to play a critical role in helping the Coalition achieve the enduring defeat of ISIS”, said the U.S. diplomatic mission.

The Global Coalition against Daesh was formed in September 2014. The Coalition’s 83 members are committed to tackling Daesh on all fronts, to dismantling its networks and countering its global ambitions.

Beyond the military campaign in Iraq and Syria, the Coalition is committed to: tackling Daesh’s financing and economic infrastructure; preventing the flow of foreign terrorist fighters across borders; supporting stabilization and the restoration of essential public services to areas liberated from Daesh; and countering the group’s propaganda.