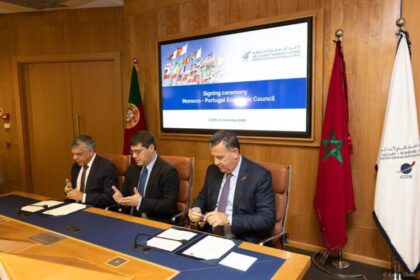 Moroccan and Portuguese business communities have agreed to set up a joint economic council to give a new impetus to bilateral trade, partnership and investment.

The agreement was inked Monday in Casablanca by chairman of the Moroccan employers’ union Chakib Alj, Portuguese Secretary of State for Internationalization Eurico Brilhante Dias and vice-President of the Confederation of Portuguese Companies (CIP) Armindo Monteiro,

The signatories have pledged to foster economic cooperation between the countries, build on the achievements accomplished in various sectors, carry out joint initiatives, explore new partnership opportunities and share expertise in business and marketing.

For his part, Eurico Brilhante Dias said that the joint Economic Council will give momentum to trade and investment between the two countries.

Morocco is Portugal’s second trading partner in Africa and the first in the Maghreb. The North African Kingdom has also become the number one destination for Portuguese exports in the Arab world.

Last year, Portugal exported $ 716.18 Million worth of goods to Morocco, and imported $ 370 million, according to the United Nations COMTRADE database on international trade.