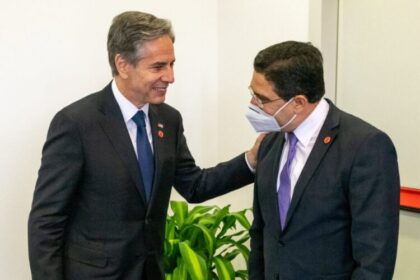 Morocco’s Foreign Minister Nasser Bourita is expected in Washington for a meeting this Monday, Nov. with US Secretary of State Antony Blinken.

The information was announced by the US State Department on its website. “Secretary of State meets Moroccan Foreign Minister Nasser Bourita at State Department,” reads Blinken’s Monday schedule. No further details are given about the meeting, except that it is scheduled to take place at 10:30 a.m. in Washington.

The latest meeting between the two men dates back to June 28 in Rome, on the sidelines of the ministerial meeting of the international coalition against Daesh.

“We discussed topics of common interest related in particular to peace and stability in the region, human rights and freedom of the press. We also discussed the Libyan situation and our common goal of restoring stability and prosperity in this country,” Blinken had then said in a tweet.

“We look forward to deepening our shared commitments, investing in mutual prosperity, and building upon the steadfast partnership. Our common interest in peace, security and stability in North Africa provides a strong foundation for continued collaboration and engagement,” the US President underlined in his message.