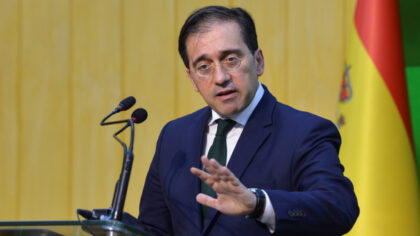 Spain considers Morocco to be a “fundamental country” for the stability of the Mediterranean region.

The remarks were made by Spanish Foreign Minister Jose Manuel Albares in an interview published Sunday November 14, by the Andalusian newspaper Diario de Sevilla.

“Morocco is a fundamental country for the stability of the entire Mediterranean,” Jose Manuel Albares told the newspaper.

“We have a strategic partnership with Morocco. It is a country with which we have all kinds of interests, and it is also a fundamental country for the stability of the Mediterranean,” he explained.

The head of Spanish diplomacy also expressed his country’s desire to further strengthen its relations with Morocco on solid foundations. “We both want a relationship based on the same pillars: trust, mutual interests and respect,” he said, referring to the speech delivered by King Mohammed VI last August.

In this speech, King Mohammed VI had said the two countries were about to “usher in a new, unprecedented phase in the relations based on trust, transparency, mutual respect and the fulfilment of obligations”.

Moroccan-Spanish relations grew tense following Madrid’s decision to host secretly Polisario’s leader in connivance with Algiers in May this year. However, tensions have eased since then between the two neighbors which share several geostrategic and economic interests.

In his interview, Jose Manuel Albares made it clear that Spain is ready to open a new stage in relationship with Morocco.

“The objective is to lay the foundations for a healthy relationship, a relationship geared towards the 21st century,” said the Spanish official, adding that Morocco has been forthcoming and fully cooperative in various sensitive areas, particularly regarding illegal immigration matters.