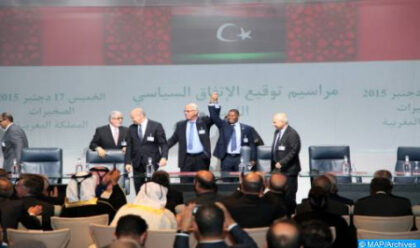 The 2015 Skhirat political agreement, which laid the foundations for reconciliation between the various protagonists of the Libyan crisis, was highlighted at the International Conference on Libya, held Friday in Paris.

This agreement, considered as the basic reference for any political settlement of the Libyan crisis, has been cited by French President Emmanuel Macron among the various international initiatives carried out in recent years to get Libya out of the political crisis in which the country has sunk since the fall of the Gaddafi regime.

“A great work has been conducted in recent years in which we all participated, with several initiatives; La Celle-Saint-Cloud in Paris in 2017 and 2018; in Palermo; in Berlin; in Tripoli recently. I do not forget the Cairo initiative and the Skhirat agreements…”, said the French head of state at the joint press conference with German Chancellor Angela Merkel, Italian Prime Minister Mario Draghi, Libyan Presidential Council President Mohamed El-Menfi and Libyan Prime Minister Abdelhamid Dbeibah.

In their final statement, participants in the international conference acknowledged the importance of the inter-Libyan agreement reached in Skhirat, considered by the UN Security Council as the “only viable framework to end the political crisis in Libya”.

They also acknowledged, since the 2015 Libyan Political Agreement, the outcomes of the Paris and Palermo conferences and other international and regional efforts on Libya.

They likewise reiterated commitment to the success of the Libyan political process, to the full implementation of the 23 October 2020 ceasefire agreement and to the holding of presidential and parliamentary elections on 24 December 2021, as they expressed the international community’s continued commitment for a peaceful, stable and prosperous Libya through an inclusive Libyan-led and Libyan-owned political process facilitated by the United Nations.

The participants also reaffirmed the need to combat terrorism in Libya by all means in accordance with the UN Charter and international law, recognizing that development, security, and human rights are mutually reinforcing and are vital to an effective and comprehensive approach to countering terrorism.