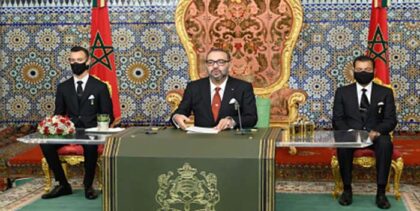 King Mohammed VI has made it clear that Morocco shall not have any economic or commercial transaction in which the Moroccan Sahara is not included with the sides that have ambiguous or ambivalent attitudes on the Kingdom’s territorial integrity.

“I wish to tell those with ambiguous or ambivalent attitudes, that Morocco will not have any economic or commercial transaction with them in which the Moroccan Sahara is not included, the Sovereign pointed out Saturday in a speech on the occasion of the 46th anniversary of the Green March that enabled Morocco to peacefully recover its southern provinces from Spanish colonialization.

In this regard, the Monarch expressed his appreciation to the countries and groupings with which Morocco has agreements or partnerships, and which consider the Kingdom’s southern provinces an integral part of Morocco’s national territory. “We have honest international partners who invest, alongside our private sector, in a clear, transparent environment, for the benefit of the region’s populations,” King Mohammed VI said.

The positive developments with regard to the Sahara question also reinforce the continuing development process in the southern provinces, the Sovereign pointed out, adding that these territories are enjoying comprehensive development, including infrastructure as well as economic and social projects. “Thanks to these projects, the Saharan regions have become an open space for development and for national and foreign investment,” the Monarch stressed.

the King underlined that the councils in the Saharan provinces and regions – which, incidentally, were elected in a free, democratic and responsible manner – are the real, legitimate representatives of the region’s populations. “I hope our southern provinces will be at the forefront of the endeavor to implement advanced regionalization, given the possibilities it affords in terms of development and genuine political participation,” the Sovereign said.

The Sahara question is the quintessential part when it comes to the Kingdom’s national unity, the Monarch underlined, adding that it is the cause of all Moroccans. “That is why it requires everyone – each in his or her respective field of competence – to remain mobilized and vigilant in order to defend the nation’s unity and territorial integrity, and to promote the development as well as the political accomplishments made in our southern provinces,” he stated further.

The Monarch seized this opportunity to extend to the peoples of the five Maghreb countries his sincerest wishes for further progress and prosperity, in an environment where unity and stability prevail.

the King also expressed his appreciation and paid tribute to the Royal Armed Forces, the Royal Gendarmerie, the National Security Forces, the Auxiliary Forces, the local government authorities and the Emergency Services for their constant mobilization to defend the unity of the homeland and preserve its security and stability.