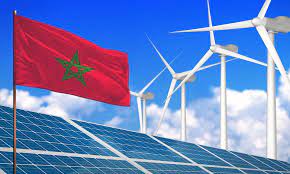 Morocco has revised upwards its ambitions for renewable energies. The target, set for 2030, will be reached five years earlier, in 2025. The transition to a green economy is firmly underway.

“This is undoubtedly one of the most important announcements made by the new Moroccan government,” commented La Vie Éco weekly magazine, deploring that this announcement, despite its crucial importance in the current context, has nevertheless gone “almost unnoticed”.

The Kingdom has just revised upwards its ambitions for renewable energies. The target of 52% of renewable energies in the energy mix will not be reached in 2030 but well before, in 2025, that is to say five years earlier, the weekly noted.

By reviewing the various projects currently underway in the field, the weekly quickly realized that the objective of 42% of the electricity mix, set for 2020, will be reached in 2022, while that of 52% will be achieved actually as of 2025, instead of 2030. The good news is confirmed by the projections of the National Office for Electricity and Drinking Water (ONEE).

Depending on the projects launched or in progress, La Vie Éco predicts that the share of renewable energies in the electricity mix would be 64.3% in 2030, for an installed capacity of 20,254 MW and a reserve margin of 12.2%.

With these new figures, the weekly estimates that renewable energies should become, from 2025, or in three years, the leading source of electricity production in Morocco, ahead of fossil energy sources.

In addition, Morocco foresees the use of nature-based solutions, the production of clean energy and the development of green industry. The Kingdom has thus revised upwards its ambition to reduce greenhouse gas emissions from 42% to 45.5% by 2030. Morocco has voluntarily adopted an integrated, participatory, and comprehensive approach reflecting the challenges and objectives of the national sustainable development strategy. The transition to a green economy is underway, the weekly affirmed.

The weekly also recalled Morocco’s participation in the Green Middle East Initiative Summit held last week in Riyadh, during which Head of the Government Aziz Akhannouch outlined the country’s strategy to ensure sustainable development fueled by green economy in line with the international efforts made to cut greenhouse gas emissions and flatten global warming.

Akhannounch had cited in this regard, Morocco’s National Climate Plan (2020-2030) which aims to speed up transition to green economy, while encouraging innovation and eco-friendly solutions to produce clean energy and contribute to the development of a green industry.

Morocco has revised upward its ambition to reduce greenhouse gas emissions from 42 pc to 45.5 by 2030 and has worked out a plan to enable industrial sectors to reduce their carbon footprint through the use of renewable energy.

Newer PostLibya: PM to reportedly step down in preparation for Dec. 24 presidential elections
Older PostMaghreb-Europe Gas Supply: Algeria shows it is not a reliable partner for Europe