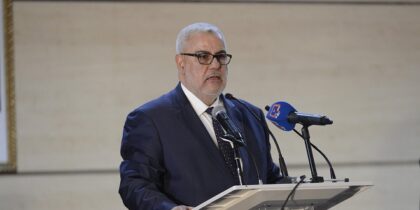 Abdelilah Benkirane, a former head of the Moroccan Government and former leader of the Islamist Justice and Development Party (PJD), is back to the leadership of the party.

Benkirane was elected Secretary General of the PJD, during an extraordinary congress of the party held Saturday, in the presence of members of the National Council and delegates from provincial and regional headquarters. He

Benkirane, who succeeds Saad Dine El Otmani, came first in the election for secretary general of the party, with 1,112 votes or 89% of the 1,250 voting party members, crushing the six other candidates, including senior PJD members, Abdelaziz El Omari and Abdellah Bouanou.

Benkirane, a popular figure in Moroccan politics, had served as the PJD secretary general twice between 2008 and 2017 and was also Morocco’s head of government from November 2011 to April 2017.

He reclaimed the leadership of the PJD following the party’s heavy loss in the September 8, 2021 general elections, where it won only 13 parliamentary seats, down from the 107 seats in the 2016 elections that enabled it to rule the government coalition for a decade.

Following this defeat, the members of PJD secretariat general, led by the secretary general of this formation Saad Dine El Otmani, had submitted their collective resignation, and called for holding an extraordinary national congress.

Besides the election of the Secretary General, the extraordinary congress discussed and adopted a draft on the postponement of the 9th National Congress.

The PJD National Council validated, this Sunday, October 31, the list of the new general secretariat proposed by Abdelilah Benkirane.