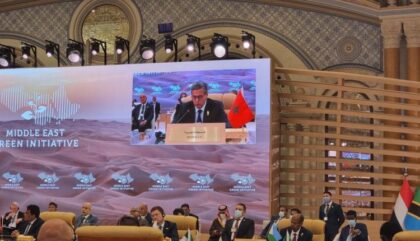 Head of Moroccan Govt. Aziz Akhannouch has outlined in Riyadh the strategy set by his country to ensure sustainable development fueled by green economy in line with the international efforts made to cut greenhouse gas emissions and flatten global warming.

In an address made on Monday at the Green Middle East Initiative Summit, Mr. Akhannouch, who is representing King Mohammed VI at the Summit, said the Paris Climate Agreement and the 2030 SDG Agenda seek to strengthen global climate action, lower GHG emissions and promote national inclusive sustainable economic development.

He cited in this regarding, Morocco’s National Climate Plan (2020-2030) which aims to speed up transition to green economy, while encouraging innovation and eco-friendly solutions to produce clean energy and contribute to the development of a green industry.

Morocco has revised upward its ambition to reduce greenhouse gas emissions from 42 pc to 45.5 by 2030, he said, noting that the North African Kingdom has worked out a plan to enable industrial sectors to reduce their footprint through the use of renewable energy.

To achieve its green growth goals, Morocco has launched a $1.2 billion program to ensure drinking water supply and irrigation over the seven coming years, he said, stressing the importance of better management of water, especially in agriculture, the reuse of wastewater and desalination of sea water.

Morocco has also encouraged fruit trees planting, underlined the official, affirming that 10 million trees have been planted annually since 2008 thanks to the Green Plan launched by King Mohammed VI.

During the past decade, 300,000 palm trees have been planted annually, he added, noting that the momentum continues under the country’s new agricultural strategy with the planting of 500,000 trees per year.

In his address, Aziz Akhannouch also underlined that Morocco welcomes the ambitious goal announced by Saudi Arabia to achieve carbon neutrality by 2060 as well as the Middle East Green Initiative and the Saudi Green Initiative forum, adding that these two initiatives are part of Saudi Arabia’s efforts to ensure the protection of the environment and the actions undertaken during its presidency of the G20.

This objective will be achieved through the establishment of an investment fund for carbon circular economy solutions in the region, creating a regional center for climate change and regional carbon capture as well as a storage center.