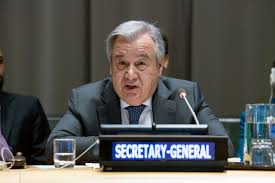 UN Secretary General Antonio Guterres has submitted a report on the Sahara issue to the UN General Assembly, where he has once again unmasked the violations, lies and false allegations circulated by Algeria and its puppet the polisario on the regional conflict.

In this report, that comes after the report submitted to the Security Council early October, Guterres stresses that the issue of the Moroccan Sahara is considered by the UN as a matter of peace and security, thus as a regional dispute under Chapter VI of the UN Charter, relating to the peaceful settlement of disputes.

The UN Secretary General confirms, once again, that the final solution to the regional dispute over the Sahara can only be political, realistic, pragmatic, sustainable and based on compromise, in accordance with Security Council resolutions 2440, 2468, 2494, 2548. The document reaffirms, thus, the final burial of all obsolete plans supported only by Algeria and the polisario, including the referendum.

These resolutions and all those that preceded them since 2007 and to which the solution must be fully compliant, according to the UN SG, confirm the pre-eminence, seriousness and credibility of the Autonomy Initiative as the only solution to this regional dispute, within the framework of Morocco’s sovereignty and territorial integrity.

These resolutions also established the roundtable discussions, with the participation of Morocco, Algeria, Mauritania and the polisario as the sole framework for conducting the exclusively UN political process aimed at achieving a political solution to this artificial conflict set up, nurtured and maintained by Algeria. The resolutions reaffirmed, once again, the obligations of Algeria as a major stakeholder in the regional dispute over the Sahara.

In his report to the General Assembly, the UN Secretary General confirms, moreover, that the armed elements of the polisario have indeed blocked the Guerguarat crossing point in October and November 2020, unveiling thus the vain attempts of the polisario and Algeria to conceal this truth.

It is worth mentioning that following the blockage for more than three weeks by the armed separatist militias of the polisario of the Guerguarat road passage between the borders of Morocco and Mauritania, Morocco undertook, on November 13, 2020, a civil engineering action by which it restored, once and for all, the free movement of people and goods in this passage.

The peaceful aspect of this intervention of the Royal Armed Forces was noted in the report of the UN Secretary General who said “no casualties were reported to the Minurso in connection with the events of November 13.” This comes in strong denial of the accusations of the polisario, whose armed elements fled the buffer zone of Guerguarat, following the FAR’s intervention, as confirmed by Guterres.

The UN Secretary General also highlighted, in his report, the Royal letter underlining the “irreversible” character of the peaceful actions carried out by Morocco at the border post of Guerguarat to re-establish free civil and commercial circulation.

The report confirms that “Morocco has remained committed to the ceasefire,” while preserving its right to respond to any provocation by the polisario militias.

The UN chief also drew the attention of the UN General Assembly to the Polisario’s illegal renunciation of the ceasefire, in flagrant violation of the Security Council resolutions.

In addition, Guterres welcomed Morocco’s cooperation with MUNURSO, particularly through the vaccination, by the Moroccan authorities, of its personnel.

This report on the other hand highlighted Morocco’s diplomatic breakthroughs in the Sahara during the past year. In this context, the UN SG shed light on the historic inaugurations of Consulates by 16 countries in the cities of Laayoune and Dakhla.

Guterres stressed, in this connection that “Bahrain, Burkina Faso, Eswatini, Equatorial Guinea, Guinea Bissau, Haiti, Jordan, Libya, Malawi, Senegal, Sierra Leone, Suriname, the United Arab Emirates, and Zambia have announced their intention to inaugurate or have opened Consulates General in the Sahara”. These diplomatic representations follow the 10 consulates of African, Arab, Caribbean and other countries, opened in the cities of Laayoune and Dakhla, bringing the total to 26 since December 2019, and illustrating the international and diplomatic recognition of the Sahara as Moroccan.

The UN Secretary General also mentioned the historic proclamation, on December 10, 2020, by the United States, of the full and complete sovereignty of the Kingdom of Morocco over its Sahara.

Indeed, Guterres said that “the United States has recognized the Moroccan sovereignty over the entire territory of Western Sahara and reaffirmed its support for the serious, credible and realistic autonomy proposal of Morocco, as the only basis for a just and lasting solution to this conflict”. He also recalled that on December 24, 2020, the United States announced the inauguration of a virtual consulate in the Sahara.

In addition, Guterres emphasized the economic and infrastructural development of the Moroccan Sahara, as well as the continuation of Moroccan investments in its southern provinces. He said in this regard that “on April 30, the Moroccan authorities announced the winning bid for the construction of the Atlantic port of Dakhla and that its construction is underway.

Similarly, Guterres noted the continuation of “construction work on a highway linking Tiznit to Dakhla”. Large-scale projects that several Arab countries were able to see during their on-site visit last June. Indeed, as evidenced by the Secretary-General in his report, “diplomatic delegations from Jordan, Oman, Saudi Arabia and Yemen” visited, on June 24 and 26, Dakhla and Laayoune to “explore investment opportunities in the Sahara”.

Newer PostMorocco can do without Algerian gas
Older PostTreaty of Pelindaba: Morocco’s non-proliferation policy, based on constant principles