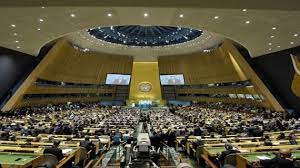 Several countries have renewed at the United Nations their strong support to Morocco’s sovereignty over its Sahara, commending the “realistic and credible” autonomy plan offered by the North African Kingdom for a lasting solution to the Sahara regional conflict.

Speaking on behalf of the Group of Arab States during the general debate currently held at the UN fourth Committee, Saudi ambassador to the UN has reiterated his country’s steadfast backing to Morocco’s territorial integrity and hailed the Kingdom’s serious efforts to find an enduring peaceful solution to the Sahara issue based on compromise and the relevant Security Council resolutions.

He praised the autonomy plan offered by Morocco for the Sahara under its sovereignty, affirming that this is the ONLY viable and practicable solution to the conflict in line with international law, UN Charter, and the resolutions of the Security Council and the UN General Assembly.

He welcomed the two round tables on the Sahara held in Geneva with the participation of Morocco, Algeria, Mauritania and the Polisario. The Saudi diplomat praised the appointment of a new UN envoy for the Sahara and condemned attempts to undermine Morocco’s sovereignty and its supreme national interests, highlighting the economic and social development accomplished in the Moroccan Sahara.

For his part, the Representative of Mexico, speaking on behalf of the Community of Latin American and Caribbean States (CELAC), said this regional bloc “continues to strongly support the efforts of the UN Secretary-General and Personal Envoy for the Sahara to achieve a just, lasting and mutually acceptable political solution”.

CELAC is convinced that multilateral efforts for “more intensive” negotiations between the parties to the conflict will continue, under the auspices of UN chief and his Personal envoy for the Sahara, to find a definitive solution to a conflict that has lasted too long.

Mexico, he said, welcomes the appointment of Staffan de Mistura as new UN envoy for the Sahara, saying his assignment includes confidence-building between the parties to the conflict with a view of “finding a solution accepted by all”.

The Representative of Côte D’Ivoire expressed his country’s support for the UN-led political process seeking to find a fair and lasting solution to the Sahara issue, affirming the settlement of this regional conflict will open up greater cooperation between States in the Arab Maghreb Union.

He also voiced backing for the autonomy initiative proposed by Morocco and recalled the high voter turnout in the Sahara during the general elections held in September in Morocco, hailing the socioeconomic development achieved in the Sahara.

The Delegate of Qatar welcomed Morocco’s realistic autonomy plan proposed for a lasting resolution of the Sahara issue, expressing hope that the draft resolution to be considered by the UN Fourth Committee will help facilitate a settlement that achieves peace, stability and cooperation in the region.

The Representative of Ecuador said that the Sahara issue needs a political and mutually acceptable solution, in accordance with the UN Charter and Security Council Resolutions, while the Delegate of Kenya stressed the continued urgency of achieving a just, peaceful and lasting solution to this regional conflict.