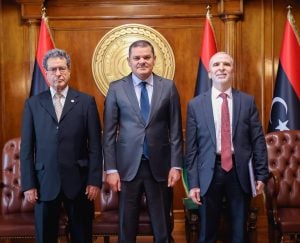 Libya’s Oil Minister has suspended for the second time the chairman of the National Oil Corporation (NOC) and referred him for administrative investigation less than a month after Prime Minister Abdelhamid Dbeibah defused the crisis between the two institutions.

NOC boss Mustafa Sanalla, under a decree (50/2021) issued by the oil ministry held by Mohamed Aoun, had failed to obtain permission from the Ministry before travelling abroad on official business. He also failed to present reports; to keep to the administrative organization; to transfer certain departments to the Ministry; and to appoint a board member as chairman of the NOC in contravention of regulations, Libya Herald reports.

Sanallah, the decree also stressed, is suspended until further notice, and it will be up to the Administrative Control Authority (ACA) to decide if he is reinstated or sacked.

Oil minister Mohamed Aoun in August already suspended Sanallah during the first bout between the two men. The NOC boss was accused of breaking a government rule under which all leading government employees must seek permission before travelling abroad.

Aoun also referred Libya’s oil boss for investigation for refusing to allow his temporary successor to take over his post and for running the NOC whilst he was abroad. Sanallah brushed aside the charges and ignored the decree. In September, Prime Minister Abdelhamid Dbeibah reinstated him.