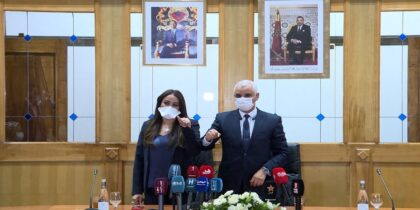 King Mohammed VI named Khaled Ait Taleb health minister after giving his approval for the dismissal of Nabila Rmili from the same position.

Now there are only 6 women left in the new government as Rmili has asked to be dismissed in order to focus on her role as mayor of Morocco’s largest city and economic hub, Casablanca.

The replacement of Rmili was taken in line with Article 47 of the constitution under which the Monarch names ministers following proposals of the head of the government.

Housing Minister Fatima Zahra Mansouri is in the same situation as she was also elected mayor of Marrakech. The same can be said about the head of the government Akhannouch and head of PAM and justice minister Abdellatif Ouahbi who are both mayors of Agadir and Taroudant respectively. But so far, they did not resign from their city management roles as there is nothing in the law that prevents combining the jobs of minister and mayor.

The new government received 223 votes in favor and 64 votes against in a parliament of 395 seats.

The head of the government had unveiled and discussed in Parliament an ambitious social program that aims at creating 1 million jobs in five years, achieving an average growth rate of 4% in its term, implementing the new development model, generalizing safety nets and social welfare and bolstering the middle class.

But the opposition said the program’s goals lack deadline and pointed to opacity as to financing sources of the government platform warning of tax hikes and foreign debt.

Head of the RNI, Akhannouch, was appointed head of government by the King after his party won most seats in parliament, followed by PAM and the Istiqlal. The three parties formed a compact government of 24 ministers to be backed up afterwards by secretaries of states.