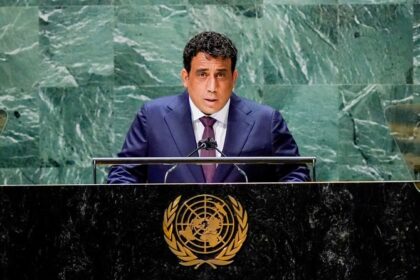 Mohammed Al-Menfi, head of the Libyan transitional Presidential Council (PC) Thursday said the North African country will organize an international Conference on its security and stability next month ahead of December key elections.

Speaking at the 76th session of the UN General Assembly in New York, Menfi said the conference will also address economic issues.

The PC leader did not name countries expected in the attendance but expressed the urgency to remove foreign militaries and mercenaries from the country as a way to build a “conducive environment for safe and transparent elections, Arab News reports.

Libya, rising from ashes of the 2011 NATO-backed revolution that removed former leader Muammar Gaddafi, is still facing daunting challenges despite the renewal of the PC and the establishment of transitional central government.

“Libya has the choice to either succeed toward becoming a democracy through free and transparent elections or go back to square one of infighting and military conflict,” Al-Menfi said.

The PC and the transitional government are still facing opposition from east-based rebel General Khalifa Haftar who controls much of the territory with his self-established Arab Libyan Armed Forces (ALAF).

Haftar temporarily resigned from his position as ALAF commander for three months until December 24, date of the elections. Libya’s House of Representative (HOR), in the preparation for the elections, has passed a presidential election law which allows political and military positions’ occupants to run for elections if they leave their jobs three months prior to December 24.

Meanwhile, the HoR has withdrawn confidence from the country’s unity government led by PM Abdulhamid Dbeibah, in a new blow to the UN-backed peace efforts.

Tension has risen between parliament, the High Council of State and the Government of National Unity (GNU) over electoral powers and laws.

Dbeibah did not comment on the withdrawal of confidence from his government, but addressing the Libyan people, he said: “You are the owner of the word and legitimacy.”

“No to war, no to division, yes to elections,” said Dbeibah. “Our goal is to expel the specter of war forever.” “We are strong with the country’s unity and integrity,” he added.