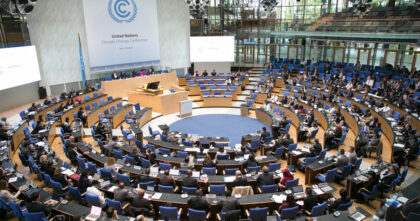 Egypt Tuesday expressed its desire to host the Conference of the Parties (COP 27) of the UNFCCC, next year.

In a pre-recorded speech played in the World Leaders Summit on Climate Change on the sidelines of the 76th United Nations General Assembly, President al-Sisi said if Egypt hosts the COP 27 in 2022, it would be a major turning point in the global fight against climate change.

The upcoming UN Conference on Climate Change could produce tangible results in terms of financing climate action and its mechanisms in a way that contributes to strengthening climate action in developing countries and raises awareness towards climate change, the Egyptian president said.

United Nations Framework Convention on Climate Change, UNFCCC, has not awarded the conference to any country yet. COP27 is initially scheduled to take place from 1 November 2022.

Al-Sisi’s proposal follows that of the Egyptian Environment Minister Yasmine Fouad who in July indicated that the Arab country is willing to host the event. The rotational conference will take place in Africa next year. UK in partnership with Italy is staging in November this year the COP 26.

Newer PostMorocco: Three biggest parties in Parliamentary elections to form next government
Older PostFormer Spanish foreign minister to stand before justice for her connivance with Algeria