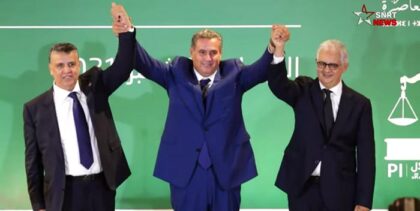 Head of the RNI party Aziz Akhannouch said his party, the PAM and the Istiqlal agreed to join efforts to form the new government after they emerged as the largest three winners of Sept. 8 elections.

The RNI won parliamentary elections with 102 seats followed by PAM with 87 seats and the Istiqlal with 81 seats.

The new government coalition gives Akhannouch a comfortable majority of 270 seats in the 395-seat parliament.

Speaking at a press conference, Akhannouch said the new coalition is based on common points in the platforms of the three parties, adding that the government that will be formed will work to achieve social and economic development goals in line with the new development model.

A committee spurred by King Mohammed VI had elaborated a new development model after it led consultations with political parties and civil society to elaborate recommendations aiming notably at bolstering growth, reducing poverty and disparities and promoting social justice and the efficiency of the civil service.

Abdellatif Ouahbi of PAM said priority in the new formation was given to maintaining cohesion. His party was created in 2009 and will take part in the executive for the first time after years in opposition.

Head of the Istiqlal party Nizar Baraka said that talks between the three parties emphasized on the government platforms before discussing portfolios distribution.