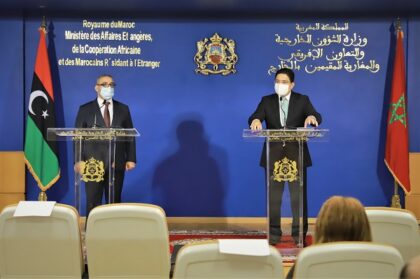 Morocco reiterated its call for Libyan parties to hold December 24 elections and maintain the well-functioning of state institutions.

The call was reiterated by foreign minister Nasser Bourita who was speaking at a news conference with head of Libya’s higher state council Khaled Mechri.

Bourita reaffirmed Morocco’s support for dialogue between Libyan parties in order to foster stability and the peaceful transition.

Morocco has often stressed that it acts as a facilitator for an inter-Libyan solution to the infighting in the north African country.

Mechri downplayed the recent withdrawal of confidence from the government of national accord by the eastern parliament saying that the move was “jamming” elections.

He said the government will uphold its duty in organizing elections without delays on December 24.

Morocco has mediated between the Libyan parties since the political agreement in 2015 in Skhirate to set up the government of national accord.

Rabat has received leaders from the warring eastern and western blocs of Libya with a view of offering conditions propitious for dialogue in favor of Libya’s unity and political stability.