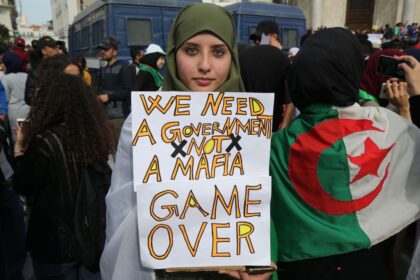 Algeria’s former president, Abdelaziz Bouteflika, passed away last week, leaving his country at the mercy of a military junta that did little to relieve the country from oil and gas curse.

He managed to gradually reduce the army’s role as a kingmaker in the country and earned his popularity in the beginning of his reign to high oil prices.

Bouteflika consolidated autocratic rule taking decisions that went as far as changing the constitution to win a fourth term.

His attachment to power and disregard for the ambitions of the people to civilian and democratic rule would ignite the Algerian Hirak, or popular protests that represented a delayed Arab Spring in the country. He had to step down giving way to his successor Abdelmajid Tebboune, a puppet of the army and probably the least popular president in the country.

After the death of Bouteflika, the army restored its powers to be the sole ruler of a poorer Algeria that pays the cost of Bouteflika’s ill-thought decisions.

Now, Algeria has barely about 30 billion dollars of hard currency reserves or even less and the country shows symptoms of a failed economy suffering from hyperinflation.

Algeria’s economy continues to pay the price of the oil and gas curse, unable to open its economy to foreign competition and to export anything else but hydrocarbons.

Bouteflika died while Algerians have become used to the long queues for basic foodstuff, the shortages in bread, milk and cooking oil, the scarcity of drinking water, as well as the lack of liquidity in banks.

His successor and army masters are cracking down on dissent using violence and arbitrary detentions auguring ill for the short-term prospects of the country.

Algeria’s current problems and failure to have a genuine civilian rule that reflects the will of the people as well as its economic hurdles and dependency on hydrocarbons are a legacy of Bouteflika that is perpetuated by a military regime lacking in insight and perceived regionally and internationally as erratic to say the least.

Bouteflika left at a moment Algeria is reproducing the same authoritarian practices that preceded the black decade, when the country fell prey to a bloody civil war.