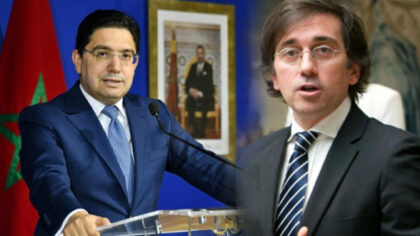 Spanish foreign minister José Manuel Albares will hold a virtual meeting on Wednesday with his Moroccan peer Nasser Bourita to discuss bilateral relations, regional issues and relations with the European Union, on the sidelines of the UN General Assembly.

The announcement was made Tuesday by Spanish news agency EFE. This high-level meeting will be first of its kind after the recent diplomatic spat between the two neighboring countries over the Sahara and Madrid’s decision to host secretly chief of Polisario militia in connivance with the Algerian regime.

The meeting is meant to “consolidate” the relationship of “mutual respect” between the two countries, and to “To take a step closer to normalization,” diplomatic sources told Europa Press.

According to these sources, the meeting wil be held at the request of the head of Spanish diplomacy.

The meeting between the two countries’ top diplomats confirms the cooling of tensions between Rabat and Madrid which share several geostrategic and economic interests.

In his latest speech, King Mohammed VI said the two countries are about to “usher in a new, unprecedented phase in the relations based on trust, transparency, mutual respect and the fulfilment of obligations”.

Spanish Prime Minister Pedro Sanchez welcomed the Moroccan Sovereign’s stand as “a great opportunity to redefine relations between the two countries and the pillars on which they are based”.