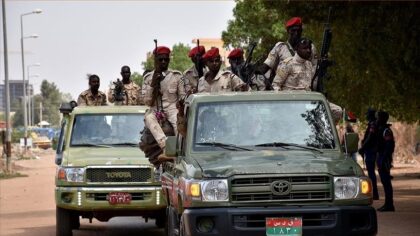 Sudan’s Prime Minister Abdalla Hamdok said on Tuesday that a coup attempt, organized by elements inside and outside the military establishment, has been thwarted, leading to the first arrests of those involved in such a plot.

The failed attempt was preceded by attempts to sow insecurity, especially in the east of Sudan, but had failed to undermine the country’s democratic transition, Hamdok said in a televised statement.

The government claimed the coup plotters were linked to the ousted Al-Bashir regime.

A military official said an unspecified number of troops from the armored corps were behind the attempt and that they tried to take over several government institutions but were stopped in their tracks. He said they had aimed to seize the military headquarters and the state television.

“There has been a failed coup attempt, the people should confront it,” the media said without further details. A senior military source told AFP the plotters had attempted to take over the state media building but “they failed.”

The military source said a group of officers “were involved in the attempt but were immediately suspended”, AFP added.

Another unidentified source told Anadolu news agency that at least 40 soldiers were arrested for their involvement in the coup attempt.

The Turkish news agency also noted that military forces have been deployed on the main roads of the capital and closed main bridges linking Khartoum with the cities of Omdurman and Bahri.

Sudan is currently ruled by a transitional government composed of both civilian and military representatives that was installed in the wake of the army’s removal in April 2019 of long-time ruler Omar Bashir.

The transitional government is still grappling with political division and economic woes. Protests also continued after the government introduced a number of economic reforms requested for the country to receive debt relief from the International Monetary Fund.