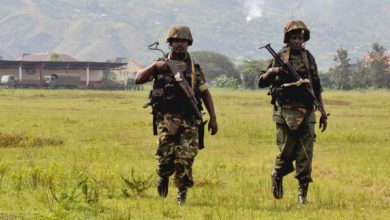 At least three people were killed and dozens wounded Monday night in a series of explosions in Burundi’s economic capital, Bujumbura, the latest in a string of attacks in the country, police and media said.

The explosions come a day after a deadly grenade explosion in a bar in the Burundian capital, Gitega, and mortar fire claimed by the rebel group RED-Tabara at Bujumbura airport on Saturday night.

At least two grenades exploded at a bus park in central Bujumbura on Monday around 7 p.m., according to a police source and witnesses.

“One person was killed and 29 injured, some seriously,” a police officer who requested anonymity told the media.

The third explosion targeted a market, killing at least two people and injuring several others, the Iwacu newspaper reported.

No Burundian officials would respond to the attacks, which have not been claimed, or to the grenade attack Sunday that killed two people in a bar in Gitega.

The RED-Tabara, which emerged 10 years ago and has its rear base in South Kivu, DR Congo, is now the most active of the Burundian rebel groups. It is accused of being behind numerous deadly attacks or ambushes across the country since 2015.