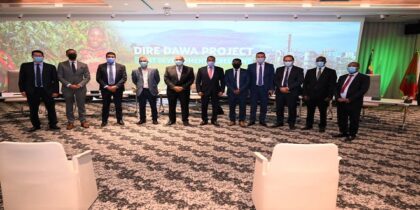 Morocco’s OCP Group and the Ethiopian government have signed an agreement to develop a fertilizer plant in gas-rich Dire Dawa in northern Ethiopia, for a total investment of up to $3.7 billion dollars, as announced by the Ethiopian Ministry of Finance.

A visiting Ethiopian delegation led by the country’s Minister of Finance, Ato Ahmed Shide, signed the agreement in Morocco on Saturday, September 18.

The fertilizer complex will use local resources, said the ministry on its twitter account.
Local facilities produce natural gas, power, and possess sufficient underground water for the facility to become “the most advanced industrial project in the country,” according to the preliminary studies.
On its part, OCP Group will provide imported phosphoric acid, sulfuric acid and potash to complete the list of essential ingredients required to produce high quality fertilizers.