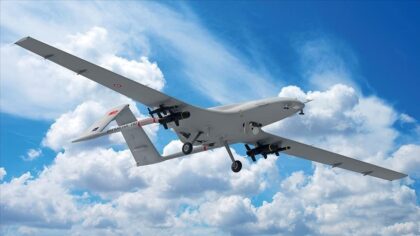 Acquiring advanced combat drones has featured as a main component of Morocco’s army modernization efforts with the receipt of 12 Turkish Bayraktar drones and news of an upcoming launch of the manufacturing of Israeli Kamikaze drones in the North African Kingdom.

The first batch from Turkey, which is part of an order of 13 Bayraktar potent attack drones, has been confirmed by the well-informed FAR-Maroc on its social media.

Members of the Royal Armed Forces have previously been trained to operate the Turkish unmanned aerial vehicles weeks ago, FAR-Maroc said.

Bayraktar TB-2 drones have proven their efficiency in multiple battlefields including in the Nagorno Karabakh conflict, Syria, and Libya.

Morocco already operates French and Israeli drones and had ordered four US MQ-9B SeaGuardian drones made by General Atomics.

Morocco is also planning to host a manufacturing plant of Israeli Kamikaze drones, Africa Intelligence reported. The plant will be set up by Israeli leader in aerospace industries firm IAI.

This comes after Morocco laid the legal framework allowing the setting up of advanced defense industries.

FAR-Maroc and other Moroccan media have mentioned in recent months the successful deployment of drones in response to provocations by Algeria’s proxies.

In April, a Moroccan drone operation killed a senior Polisario military commander, along with his militiamen as they violated the ceasefire east of the Berm in the Moroccan Sahara.

The drone strike has sent shockwaves and serves as a warning for both Algeria and the Polisario that any provocation east of the berm will be met with a technologically painful response.

The deployment of drones also reflects the gap between Morocco’s and the Algeria’s military doctrines. While Morocco emphasizes on technologically advanced weaponry, Algeria and its proxy the Polisario are bogged down in the guerrilla warfare that came to an end with the erection of the berm in the late 1990s.

The more it provokes the more it loses. This is the case of the Polisario which wanted to create a stalemate in the Guerguarat crossing by sending its armed men there to block traffic but finished by being kicked out definitely from the area. The Polisario bragged about ending the ceasefire and resuming attacks east of the berm and ended by being pushed further east to the Algerian border as Morocco extends the security wall.

Morocco is clearly on the defensive but strategically on the offensive as it continues to further strengthen its military positions in tandem with gaining growing international support for its territorial integrity.