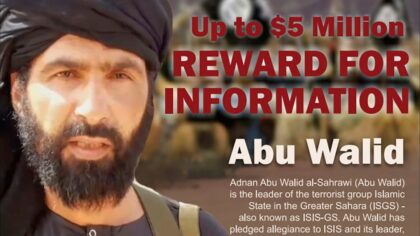 With the announcement of the killing by French forces of the most wanted terrorist in West Africa Adnan Abu Walid al-Sahrawi, the international media established the link with the Polisario, underlining the proven collusion between this group of mercenaries and terrorism in the Sahel.

Recalling the jihadist operations carried out by Abu Walid al-Sahrawi, the media focused on his radicalization in the camps of Tindouf and his training in Algeria, before joining the Islamist armed movement which found in the camps of the sequestered, a fertile ground to flourish amid the decay of the separatist movement, its leadership and the absence of real prospects for the future of its youth.
The real name of Abu Walid al-Sahrawi, a polisario activist, is Lahbib Ould Abdi Ould Said Ould El Bachir. He left the Tindouf camps in 2010 for Mali with some of his comrades to join the Katiba Tarik Ibn Zyad linked to Al Qaeda in the Islamic Maghreb (Aqmi). A year later, he founded the Movement for Unity and Jihad in West Africa (Mujao) in the Gao region.

In October 2011, this radical movement launched its first major operation by kidnapping two Spanish aid workers and an Italian woman in the Tindouf camps. Since then, Abu Walid al-sahrawi has become, alongside the Algerian Mokhtar Belmokhtar, one of the most powerful jihadist leaders in the Sahel and the most wanted terrorist in West Africa. In May 2015, he pledged allegiance to Daech and created terror group “Islamic State in the Greater Sahara” (ISGS).

On October 4, 2017, he attacked a Nigerien patrol accompanied by U.S. Special Forces in Tongo Tongo, Niger. Five Nigeriens and 4 Americans were killed. With this attack, he became one of the most wanted jihadists on the planet, with a $5 million tag-price on his head. At the end of February 2018, al-Sahrawi was wounded in an attack south of Indelimane in Mali, retreated to his family stronghold in the Tindouf camps for treatment. Public enemy number one in the border area between Mali, Burkina Faso and Niger, al-Sahrawi was killed following a strike by the Barkhane force, but his soldiers continued spreading terror and desolation in the desert.

Last Saturday, two Moroccan truck drivers were killed and another was wounded by gunmen in the commune of Didiéni, located about 300 km from Bamako. According to terrorism experts quoted by several media outlets, the modus operandi of this barbaric act bears the hallmark of the Polisario terror group.

The attack was carried out by the separatist group, which receives its orders from Algeria, after the failure of the Guerguarat operation, to prevent Moroccan truckers from using this trade route.

All these elements, which add to the deadly crimes perpetrated by the polisario with the support of the Algerian army, should lead to the inclusion of this separatist group in the lists of global terrorism.

The U.S. Department of State, the UN and the European Union (EU), which have their own lists of terror entities, groups or organizations subject to sanctions or international prosecution, should act following these revelations to counter the security threats linked to the Polisario and the Algerian regime that are endangering the Sahel-Saharan region.