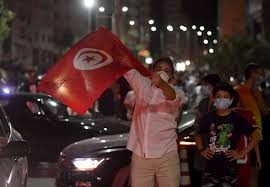 Over 90 political and civil society activists affirmed Sunday in a statement “commitment to the 2014 Constitution which crowned the Revolution process,” and rejection “of any attempt to circumvent or violate it,” reported TAP news agency.

The statement signatories considered that the latest remarks by the advisor to the President “confirm the putschist process initiated on July 25 in violation of the provisions of the Constitution through exceptional measures that do not comply with the content of Article 80 of the Constitution.”

They appealed to “pool all efforts” against what they called “the coup d’état”, to “promptly return to the democratic process” and to “put an end to the exceptional measures, including the freezing of the parliament’s activities,” added TAP.

They also raised concerns about the state of freedoms in Tunisia, notably with regard to travel bans, trials of civilians in military courts and arrests and raids conducted out of the judicial and legal process.

These are serious indicators pointing towards a new dictatorship, they considered.

Other press reports said more than 1,500 people, including activists and several members of parliament, signed an online petition to denounce the threats they say are hanging over the fundamental law.

President Kai Saied who seized the executive power, froze the parliament, and dismissed the Prime Minister as well as several cabinet members and senior officials last July 25 alluded Saturday to the upcoming formation of a government and to the amendment of the Constitution.

“It is necessary to make changes within the framework of the Constitution. Constitutions are not eternal. They can be changed! It is necessary that the changes suit the Tunisian people, because after all, sovereignty belongs to the people,” he said Saturday before his supporters and a handful of journalists.

About the formation of a government he said “I am watching over the choice of people, that the people appointed have integrity and loyalty and do not betray their promises.”