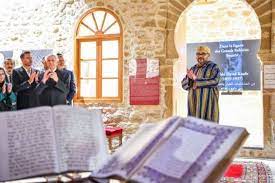 President of the Paris-based Arab World Institute (IMA), Jack Lang, paid tribute to King Mohammed VI for his “strong” and “continuous” commitment to the preservation of Jewish-Moroccan culture, history, and heritage.

“Morocco is a unique case in the world,” said Lang in an interview with MAP, at a time when the IMA is preparing to host an exhibition entitled “Jews of the East, a multi-millennial history” where Morocco will occupy “a prominent place”.

The president of the IMA listed in this context “everything that is being undertaken today in Morocco to restore the Jewish heritage, including the Mellahs (Jewish urban districts), the synagogues, the cemeteries, the museum that the King has launched in Fez, the current museum in Casablanca … without forgetting the Sovereign’s decision to introduce the history of Moroccan Judaism in schools’ syllabi.”

The exhibition “Jews of the East, a multi-millennial history”, which will be held from November 24, 2021 to March 13, 2022, is a continuation of the exhibitions “Hajj, the pilgrimage to Mecca” in 2014 and “Christians of the East, 2,000 years of history” in 2017, a trilogy devoted to monotheistic religions in the Arab world.

This cultural event will shed light on the multi-millennial history of Jewish communities in the Arab world. From the Mediterranean to the Euphrates and the Arabian Peninsula, the exhibition will explore the multiple facets of the coexistence between Jews and Muslims, from the first links forged between the Jewish tribes of Arabia and the Prophet of Islam, to the emergence of the main figures of Jewish thought during the medieval caliphates in Baghdad, Fez, Cairo and Cordoba, from the rise of Jewish urban centers in the Maghreb and in the Ottoman Empire to the beginnings of the definitive exile of Jews from the Arab world.

In light of this unprecedented historical perspective, the exhibition will seek to promote and preserve the memory of a rich heritage. Thanks to loans of works from international collections (France, England, Morocco, Israel, the United States, and Spain), the IMA will present unseen works in a wide variety of forms: archaeology, manuscripts, paintings, photographs, liturgical and everyday objects, and audiovisual and musical installations.

“This exhibition will be a world first. For the first time, in a major institution, the multi-millennial history of the Jews in the East will be presented,” said the president of the IMA.