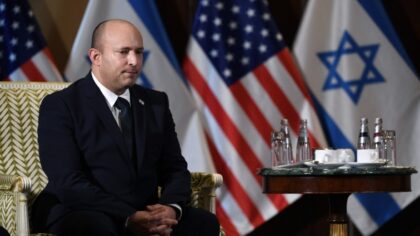 Israel and the U.S. plan to build on the regional alignment under the Abraham accords in order to counter Iran’s influence, US media reported.

The renewed Israel-U.S. cooperation to curb Iran’s influence in the region will be discussed between Israeli Prime Minister Naftali Bennett, who is paying his first visit to Washington, and President Biden.

Besides Iran, they will discuss military aid to Israel, the Israeli-Palestinian issue, China and more, Axios reported on August 26.

Bennet who started a visit to the U.S. on Tuesday “wants to tell Biden that, unlike Netanyahu, he wants to cooperate with the U.S. on Iran.”

David Makovsky, director of the Washington Institute for Near East Policy Project on the Middle East Peace Process, said in an op-ed on The Hill that Iran’s nuclear program is a matter of concern for the two countries.

Bennet is likely “to urge the U.S. to leverage closer regional ties between Israel and Arab Gulf states to ensure greater U.S.-led regional cooperation in dealing with Iran in areas like intelligence, cyber and other forms of ties,” said Makovsky who served between 2013-2014 in the Office of the Secretary of State as a senior adviser to the Special Envoy for Israeli-Palestinian Negotiations.

He added that Bennet advocates “autonomy on steroids” for Palestinians who live in Palestinian cities and their environs, albeit in only part of the West Bank.

“An economic plan for over 80 percent of West Bank Palestinians who live in these areas will not solve the conflict after a decade of stagnation, but it could be a start,” he said.

“There are indications from senior Gulf officials with whom I’ve spoken that key Arab states could provide support for a private sector initiative,” he said, noting that “this could increase U.S. interest in deepening Arab-Israeli normalization.”

He highlighted that neither Biden nor Bennett want Netanyahu’s return. “It is yet another reason for the two to use their upcoming meeting to work together and deal with the considerable common regional challenges ahead,” he said.