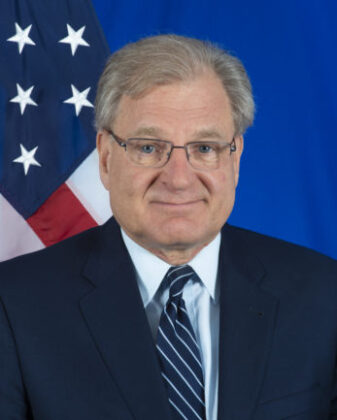 The US ambassador and special envoy for Libya, Richard Norland, said on Monday in Rabat that his country is “very grateful” to the “useful” role played by Morocco to support the political process in Libya.

“The role that Morocco plays in the region to support the political process in Libya is very useful” and the United States of America is “very grateful”, he told the press after talks with Minister of Foreign Affairs Nasser Bourita.

The US diplomat said talks with Bourita covered “several topics, including the question of the upcoming elections in Libya, scheduled for December,” describing these talks as “very useful”.

“Now is the time to establish the constitutional and legal basis for these elections to take place in December,” Norland added.

He highlighted “the role that Morocco is acting in the region to support the political process in Libya,” and reiterated that the US is “very grateful” for Rabat’s key role in the peace-making endeavor.

The meeting followed several statements from the US Department, which commended Morocco’s mediation role in the Libyan conflict.

In April, US Secretary of State Antony Blinken said the US was appreciative of Morocco’s integral role as a mediator in the Libyan conflict and its commitment to regional security in the face of terror threats in North Africa and the Sahel.

UN officials and Libyan officials have repeatedly praised Morocco for playing a vital role in laying the groundwork for the ongoing UN-led efforts to find a political solution to the decade-long crisis in Libya.

Morocco’s government, which has repeatedly denounced foreign interference in Libya, renewed its position in June after delegations from previously rival Libyan factions visited Rabat to discuss the future of their country as well as that of Libya-Morocco relations.

During both visits, Moroccan officials renewed Rabat’s commitment to strengthening dialogue between the Libyan parties.

For their part, the two Libyan officials recalled Morocco’s steady support for the Libyan peace talks. They said that the series of meetings Morocco organized to convene the two Libyan factions, namely the Bouznika, Skhirata, and Tangier meetings, have been vital and decisive in helping the Libyan parties find a common ground and commit to dialogue.