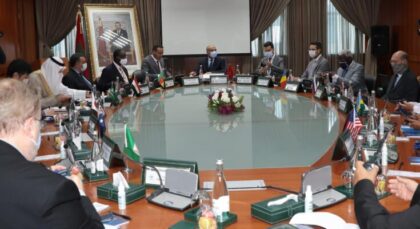 Several ambassadors accredited to Morocco paid, on Thursday, a visit to the headquarters of the Central Bureau of Judicial Investigations (BCIJ), during which they were briefed on the efforts made by Morocco in the fight against terrorism and organized crime.

This visit is part of the openness of the security bodies on their environment as well as the transparency policy led by the Moroccan security apparatus, whose actions and achievements are now recognized internationally, more particularly in the fight against terrorism.

Particular emphasis was placed on the advances made by Morocco in the field of the fight against terrorism and organized crime, as well as on the importance of Morocco’s security cooperation with the rest of the world.

The delegation of ambassadors, led by the Diplomatic Foundation, met on this occasion with the director of BCIJ Cherkaoui Habboub.

Several presentations, made during the visit, focused on security issues in several regions of the world, particularly in the Sahel, and on the need to further strengthen cooperation in the fight against terrorism, particularly in this African region.

The diplomats seized the opportunity to stress, in statements to the press, the importance of security cooperation in the fight against terrorism and Morocco’s role in this area, an internationally-recognized role, they said.

The Moroccan security bodies have the required strength and capacity not only to guarantee and preserve the security of Moroccans, but also to cooperate with other countries in the security field, underlined the president of the Diplomatic Foundation Abdelati Habek.

He cited, in this context, the dismantling of several terrorist cells in foreign countries thanks to intelligence tips by Moroccan security services. This cooperation takes place in full respect of international conventions and treaties to which Morocco fully adheres, he said.

At the end of this visit, Cherkaoui Habboub received from the Foundation a trophy and a letter of thanks intended for the Director General of the National Police (DGSN) and the Directorate of Surveillance of the National Territory (DGST) Abdellatif Hammouchi, in recognition of the efforts made by Morocco in the security field.