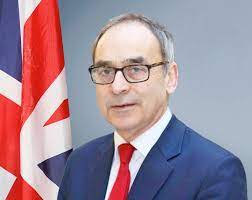 The new shipping line to connect directly Tanger Med and Poole in southern England would be operational in September, said British Ambassador to Morocco, Simon Martin.

In an interview with Le360 news outlet, the United Kingdom’s Ambassador to Morocco, Simon Martin, announced that the shipping line between the ports of Tangier Med and Poole, England, would be operational in September 2021.

The connection, announced last February, will facilitate trade between the two countries.

Actually, this route will half the journey duration between the two countries, which will be connected in less than 3 days, against more than six days currently by land.

The British diplomat underlined another important benefit of the maritime connection, namely the reduction in CO2 emissions that this line will allow in trade between the two countries.

Traffic between the two ports is expected to exceed half a million containers annually.

“According to studies that we carried out during the preparations for this line, we have noticed that currently half a million containers arrive at Tanger Med annually and reach the United Kingdom. This partly explains why we decided to operate the line,” he explained.

With the entry into force of the association agreement between Morocco and the United Kingdom on January 1, 2021, post-Brexit, and the entry into service of this line, exchanges between the two Kingdoms will be facilitated and should score strong growth, according to the ambassador.

The line will be reserved for freight, however the diplomat does not exclude the transport of passengers at a later phase. In this connection, he called on the company in charge of this route to set up this service quickly.

“I think there will be a great demand for passenger service, not just freight. But to begin with, it will only be freight,” said Ambassador Simon Martin.

The new weekly RoRo route, which will directly link Tangier to Poole in the south of England with no additional stops, will be run by United Seaways.

This new path should allow Moroccan products to access English territory in less than three days, and should also help to avoid traffic congestion and additional import procedures caused by Brexit.

The new direct shipping route will help Moroccan products avoid the border friction created by Brexit on goods arriving via Europe by road.

The mission of United Seaways, a British maritime transport specialist, is to develop British cross-border trade, by identifying and opening new sea routes between the United Kingdom and destinations deemed strategic.

While it will initially focus on providing an alternative route to lorries already travelling to the UK via Europe, United Seaways had said when announcing the new line that it hoped it would encourage British importers to increasingly source from North Africa.

United Seaways claimed the service would be “competitively priced” against the land route, despite the vessel likely returning empty to Morocco at least at the beginning.

Fruit & vegetables make up the majority of Moroccan exports to the UK, though they remain a small fraction of those from the EU. British importers bought £180m of fresh produce from Morocco in 2020, compared with almost £1.8bn from Spain alone.

North Africa Post's news desk is composed of journalists and editors, who are constantly working to provide new and accurate stories to NAP readers.
NEWER POSTPegasus case: Amnesty and Forbidden Stories fail to provide evidence for accusations against Morocco
OLDER POSTU.S. reaffirms recognition of Morocco’s undivided map including the Sahara