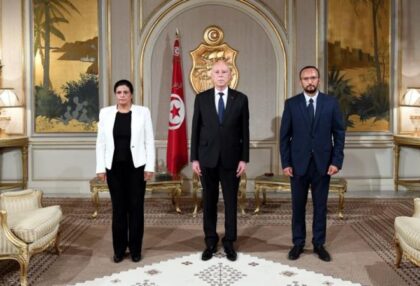 Tunisian President Kais Saied has dismissed Finance and Technology ministers of the cabinet of outgoing Prime Minister Hichem Mechichi as he continues the purge at top state level.

A statement from the presidential office said Ali Koli, Minister of Economy, Finance and Investment Support is replaced by Sihem Boughdiri, a senior official at the ministry.

Shortly after the announcement, a swearing-in ceremony of the new acting Minister of Economy, Finance and Investment Support Sihem Boughdiri Nemsia and acting Minister of Communication Technologies Nizar Ben Neji, was held at the Palace of Carthage.

During his meeting with Ms. Boughdiri Nemsia, the President stressed the imperative of upholding fiscal justice, while criticizing the performance of the former minister Ali Kooli, official news agency TAP reported.

He also placed emphasis, during his meeting with Ben Neji, on “the neutrality of the public service” and “the importance of the Ministry of Communication Technologies”, speaking of “abuses occurred in recent years, including the eavesdropping devices.”

Koli and Kraiem are the second and third cabinet members to be fired by the President who sacked Mechichi late last month as part of an unprecedented move that saw him seizing the executive power and suspending the parliament.

Said’s decision came after months of a power struggle that included the president, the prime minister, and the speaker of parliament. Disagreement over a partial government reshuffle announced by Mechichi and opposed by the president had resulted in a constitutional stalemate since last January.

Saied also late last week appointed a new head of the interior ministry which was also led by Mechichi.

The Tunisian President has defended his action that he backs with the article 80 of the constitution which allows the President to suspend the legislature and appoint a new executive within 30 days, in the event of special circumstances.