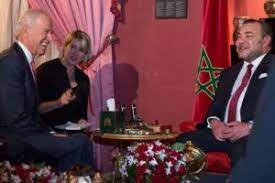 King Mohammed VI has sent a message of congratulations to President Joe Biden on the celebration of the United States’ Independence Day, calling for strengthening bilateral ties through ambitious partnerships in all fields.

In his message, the King expressed his warm congratulations and sincere wishes for “health, happiness, and peace of mind to President Biden and further progress and prosperity to the American people.”

The King also voiced his willingness to celebrate with President Biden the “bicentenary of the Tangier legation offered by our venerable ancestor, Sultan Moulay Slimane, to the United States of America as a token of friendship and as a mark of the consideration he had for the government of your country.”

This year marks the 200th anniversary of the founding of the American Legation in Tangier.

The legation stands “as a symbol of the privileged and long-standing relations between the Kingdom of Morocco and the United States of America,” the Monarch pointed out.

“Our centuries-old bilateral relations, based on mutual esteem and consideration, provide strong incentives for us to move forward and constantly strengthen our ties through ambitious partnerships in all fields,” said the King.

In his message, King Mohammed VI also underlined the Kingdom’s strong commitment in favor of universal values and its willingness to coordinate action with President Biden’s Administration “to promote these noble values which constitute a solid basis for the pursuit, together, of our common action in the service of strengthening cooperation and the long-standing friendship that binds our two countries.”

North Africa Post's news desk is composed of journalists and editors, who are constantly working to provide new and accurate stories to NAP readers.
NEWER POSTCOVID-19: Morocco received 19.5 million doses of vaccine by July
OLDER POSTEpicenter of Algeria’s pro-democracy protests moves to Kabylie region on back of crackdown